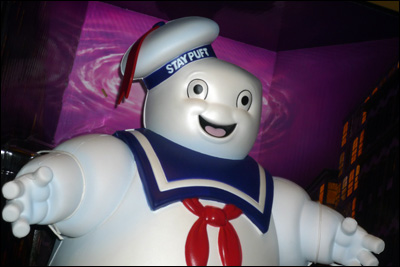 Mattel surprised us this morning by delivering an SDCC Exclusive Stay Puft Marshmallow Man to us before the show begins this Thursday. We opened the shipping box (which was HUGE) and found a very large simulated aluminum carrying case. The case is very large, roughly 24" x 18" x 12" (which leads me to believe that these Stay Pufts will only be available in the US). Opening up the case can be complicated as it isn't easily apparent how it should be opened. You can open it from the top, but you must disassemble the carrying handle, or you can open the bottom. Once opened the case displays a scene that just depicts a phone call with the buster exclaiming "He's Back!", followed by a cool graphic of five Ghostbusters (yes, five) running to action.

Unfolding the diorama unveils the Stay Puft Marshmallow Man terrorizing the streets of New York, along with a pop out Ghostbusters HQ and Ecto-1. The Stay Puft looks amazing in the diorama display, and it definitely looks great in person. The Stay Puft stands 21" tall (which puts him at 1/64 scale) and is made from a soft, squishy material. There are several points of articulation which will make him pose-able with your figures. Given the scale, it might look best with the Ghostbusters Minimates.

Overall, this is an amazing figure. The diorama really helps sell it, and it definitely looks amazing in person. This Stay Puft will be available at San Diego Comic Con starting Thursday and will be available for $70. The extras unsold at SDCC will be available in early August on MattyCollector.com. Can't get one? We will be giving away this Stay Puft during Comic Con. Details will be posted on Wednesday and a winner will be announced on Monday!

I have a little bit of a theory on the release of this Stay Puft. I think the SDCC Exclusive component is that it comes with the diorama and is $70. I think that Mattel could be re-releasing this item next year (perhaps with a different angry head) for less money, and without diorama.

The cost is definitely due to the large box size and diorama. I envision them requiring several shipping containers to hold all of these from China, and wonder how many they will actually have at SDCC (as they take up a lot of room). A regular mailer and poly bag could reduce the shipping size and cost of these in the future.
Like Ghostbusters Fans on Facebook: http://www.facebook.com/ghostbustersfans
Follow Ghostbusters Fans on Twitter: @gbfans

5 ghostbusters, eh? The rookie would sell me on Club Ecto if it was an exclusive.

I'll be trying to get at least one of these. Definitely at least one.
Like The Buffalo Ghostbusters on Facebook!

Doctor Venkman wrote:My guess is The Rookie is definitely coming in next year's subscription (either as a regular figure or the exclusive). Seems like good marketing to put him on the packaging like that.

I don't really think so. I would be disappointed if they decided to release another regular buster as a filler, before releasing some of the other unique figures (Dana/Zuul, Gozer, Janine.. etc). That being said.. I would love a Rookie if it included the game pack!
Like Ghostbusters Fans on Facebook: http://www.facebook.com/ghostbustersfans
Follow Ghostbusters Fans on Twitter: @gbfans

I want Stay Puft but can't afford him at the moment.

| alkaline | wrote:Looks cool but man that is one god awful parting seem down the side of the piece....

I'm with you, that seam is AWFUL. The fact that stuff like this is still being released this long after the movie is incredible, and beggars can't be choosers I suppose... but the seam REALLY stands out in these pics. Probably won't go after it for that reason alone.

AJ Quick wrote: I would be disappointed if they decided to release another regular buster as a filler, before releasing some of the other unique figures (Dana/Zuul, Gozer, Janine.. etc).

If we get a figure of a nameless cipher before we get Janine or Dana, Mattel will officially suck monkey balls. A second figure of Louis would be almost as stupid.

Letmebleed75 wrote:can these be bought on any day of the con or one specific date?

Especially after I put it away in my closet, unopened, for the next 2 decades.

HOORAY!
Staypuft is my Shipmate….

Gareee wrote:I wasn't too interested in this until seeing the diorama... thats just amazing! Now I'm trying to figure out if we have a 6 foot table somewhere that would be worth using as a display.

AJ Quick wrote:The seam can be easily corrected with a razor and a steady hand.

I was going to suggest the same thing.

I'll definitely get one of these, but I think after this one, that's it for Stay Puft figures for me. Too bad the face isn't more accurate to the source material, but what're ya gonna do? The diorama and overall packaging is great, but it also would've been nice if the firehouse wasn't so wide. What happened there? It's, like, twice the width it should be. Eh...

It'll look GREAT with an Ecto-1 (perhaps the Hallmark ornament for correct scale?) and some figures!

By aburns84 -  July 19th, 2011, 12:15 pm
-  July 19th, 2011, 12:15 pm#334258
I was excited about getting this but not sure now. I like that it is big, but it is a little too big. For my room I can handle the two feet high, but the width and depth will kind of be a problem since everything would have to be rearranged and some items moved to storage. I definitely do not have room for the diorama. The facial expression and the seam on the side is very distracting. I also have mixed feeling on the material. Depending on what they used it may be too soft and rip or will pick up impressions easily. Plus, giving the size we may be looking at a 15+ shipping charge making this about $85 or so for it. Above all the seam and face are turn offs. The size is a bit of a problem, but not a show stopper. I expected a little more. I did have this guy budgeted, but I'm leaning towards no. Without the diorama I would not want to pay more than $30 for this guy given the minor flaws. Looks like I will stick to my Stay Puft bank that has a better expression and decent height.

By Soren -  July 19th, 2011, 1:07 pm
-  July 19th, 2011, 1:07 pm#334265
Ehi, AJ, we'd need your help with this. Can you tell us the exact weight (with the original box it came in, diorama, staypuft, fakealluminum suitcase, everything) of the original package? Since you suspect it will be sold in the US only, we need it to calculate an estimate (the more exact the weigh, the more exact the estimate) of the s&h of the fowarding service. Thanks!!

Its the size though, this would only qualify for Express Mail shipping through USPS.

Trying not to rush to judgement but...this makes n[…]

I've touched on painting the shell here on this Pr[…]

Thanks for posting this great tutorial!