Ghostbusters 1 & 2 Coming to Blu-ray This Fall 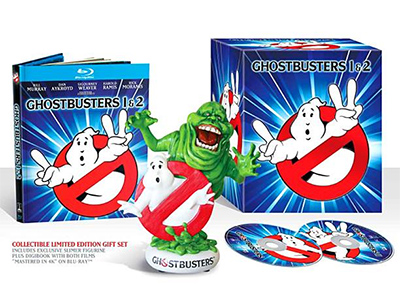 • NEW! Time Is But A Window: Ghostbusters II and Beyond - Roundtable Discussion with Director Ivan Reitman and Dan Aykroyd (Part 2)
• NEW! Deleted Scenes
• NEW! “On Our Own” Music Video – Bobby Brown

Ghostbusters Fans will giving away several copies of the new Blu-ray directly from Sony Entertainment, so look forward for details on that!

The new transfer of Ghostbusters will also be making it's way back into theaters for 1 week starting on August 29th at over 700 theaters across the US.

CraigTHEOWL1 wrote:AJ was this the big breaking news for tomorrow?

I missed the chance to see it in theatre as a child, so I am hoping I will be able to catch it now

And the blu ray is amazing also!

I can`t f****g belive it. Finaly our prayers are comming true. GB2 on Blue Ray. Even if I have allready the BR Version of GB1 I`m gonna by the set. This is so amazing

AJ Quick wrote: The new transfer of Ghostbusters will also be making it's way back into theaters for 1 week starting on August 29th at over 700 theaters across the US.

That is the news I'm most excited for. I'll be at my local theater in full uniform, along with some fellow Portland Ghostbusters, I'm sure!

GohstTarp wrote:Just hope it's a real 35mm film print and not a crappy 4K video projection.

I have a digital copy of GB2 in HD from when it was aired on HDNET, but it'll be great to finally see those deleted scenes! The new interviews should be exciting, and both flicks are in 4K, so that's awesome too!!

I just wish I didn't JUST buy the 4K Blu-Ray of GB1 last month now, I had a feeling something like this would happen what with the 30/25 anniversary. Ahh, the pressure of getting new home theater gear and wanting to watch something cool on it.

AJ Quick wrote: It isn't cost effective to produce 700+ 35mm transfers for a 1 week release. So it will likely be 4K.

Darn those economic realities! Oh well... I will still go and have fun. On the bright side, it's still higher quality than you can get at home.
Uniform Build Thread
Proton Pack Build Thread

By 910dohead -  June 5th, 2014, 3:56 pm
-  June 5th, 2014, 3:56 pm#4796037
It's about damn time! Haha! Stoked that Sony stepped up and are including some deleted scenes. I really hope that they include the deleted scenes that we want to see and not just alternate takes or extended scenes. I really wish they would include the Fort Detmerring and Louis vs. the gang bangers scenes to the Ghostbusters blu-ray. I'd love to see those but i'm not holding my breath. If this set didn't include GBII, I wouldn't double dip unless they found some magical way to make it look better than the 4K. Overall, i'm glad that it's finally getting a blu-ray release.

I really wish we would have had more from the first film, especially considering the scanned HD raw footage that leaked. Give us Fort Detmerring! Aykroyd's original script would have been killer!

Doctor Venkman wrote:Geez... just saw the price that is listed on Ghostbusters.com...

I'm guessing that's for the box set with the Slimer and logo. The digibook will probably be cheaper.

Doctor Venkman wrote:Geez... just saw the price that is listed on Ghostbusters.com...

I'm guessing that's for the box set with the Slimer and logo. The digibook will probably be cheaper.

So far that's the only version I've seen of the set.

If they're going to release one without the statue that's good though.
Like The Buffalo Ghostbusters on Facebook!

ThrowingChicken wrote:Ugh who is the design team in charge of the Ghostbusters releases, because they really suck at their job.

He's got a point.

The blue background with blinding light looks like it was meant for toothpaste packaging, and the logo appears to be having a stroke as it attempts to flash gang signs.

Decided to beef up my pack by using some electrica[…]