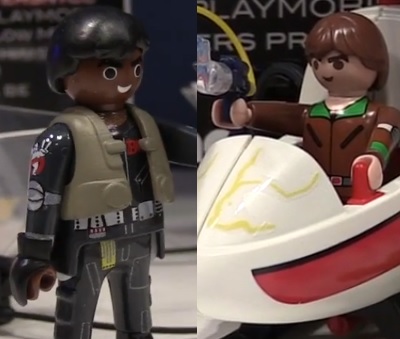 Following a Twitter response earlier in the month where toymaker Playmobil hinted that there could be more Ghostbusters products in the future, this news was confirmed during this weekend's New York Comic Con, where the company unveiled the next sets in their Ghostbusters collection, based on Ghostbusters II and The Real Ghostbusters.

The figures inspired by The Real Ghostbusters will come with an assortment of vehicles, much like some of the sets released by Kenner back in the 1980s. It has been noted that the Ghostbusters II and Real Ghostbusters sets will form a single second wave, which is believed to span eight sets in total, rather than second and third waves respectively in the licenced range.
This may mean that fans hoping for figures of Vigo the Carpathian, or the cartoon's notable villains may be left disappointed.

The new sets are expected to appear in stores in 2018.

Photo Credit: NerdNewsToday
Noremon, mbd liked this
What would Ryan do?

By Peter Venkman Jr. -  October 21st, 2017, 7:27 pm - Posts: 507
-  October 21st, 2017, 7:27 pm #4900042
Very pleased to hear that Playmobil is continuing the Ghostbusters line up. I Just got many of the sets for my birthday and I bough the Firehouse and Slimer sets shortly afterwards. It is very nice to see new Real Ghostbusters toys again, especially since last year was the 30th anniversary of the series premiere and no merchandise was produced. Looking forward to seeing more pictures of both sets. Yeah, it would be great to get some pics of the po[…]

Electronics are great for a full size build and […]