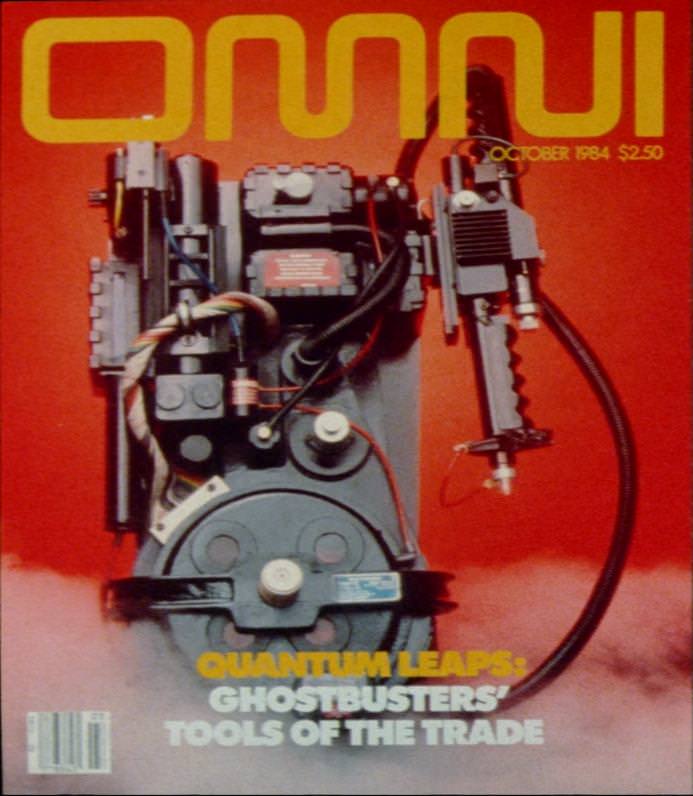 I've heard that the person who owns the prop doesn't want others to have high res scans.

The highest resolution reproduction I know of is this one: 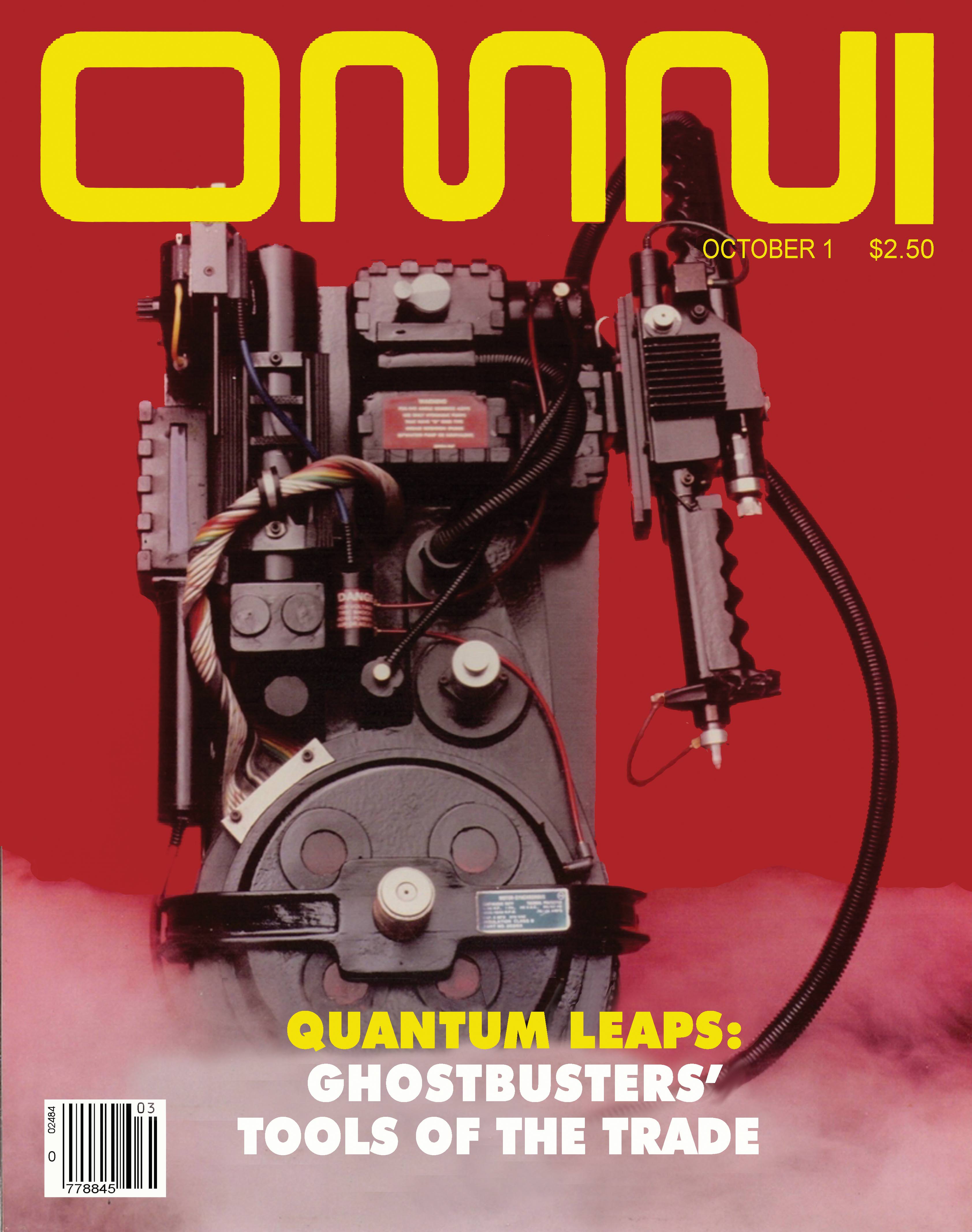 I believe it is the same proton pack image as the original but the image has been extracted out (masked). You can see it lacks the orange "flare/glow" behind the proton pack. In addition to that, the fonts have been recreated. You can tell because the "Tools of the trade" caption features a false smoke background, it's missing the year (1984), the dollar sign and the bargraph are different.

It's the same proton pack image though, which is hard to explain.

I'm curious where the the source image of the second image came from.

I'm curious where the the source image of the second image came from.

It's probably that the prop owner felt guilty and decided that prop makers deserved to see the pack in the image in high detail.

Not wanting people to simply print out high res versions of the cover itself and have the same image, he or she probably decided to mask out just the pack (from the original prop scan) and release it.

Someone else probably used the mask to recreate the original cover (poorly).

Oh noes like it makes theirs less special than a reproduction. :O
NotSabbat liked this
"Ok. opening at number 2, to sub 50 million, next to the 2nd weekend of an animated kids movie, is NEGATIVE. Let me just clear that up right now. There is no middle ground on this. Studios DO NOT spend 100 million in marketing money to open at number 2. No sir. No. No. No. No." - Richardless

-  November 18th, 2018, 3:52 pm #4910846
In this case though there is some grounds to be a bit lenient on the person who owns the cover, as there is always the chance that with there being a high-resolution version of the whole cover out there, someone could take it upon themself to use it to sell forgeries.
NotSabbat liked this
What would Ryan do?

In this case though there is some grounds to be a bit lenient on the person who owns the cover, as there is always the chance that with there being a high-resolution version of the whole cover out there, someone could take it upon themself to use it to sell forgeries.

At least in this case the owner was apparently kind enough to share the proton pack part of the image in very high detail. 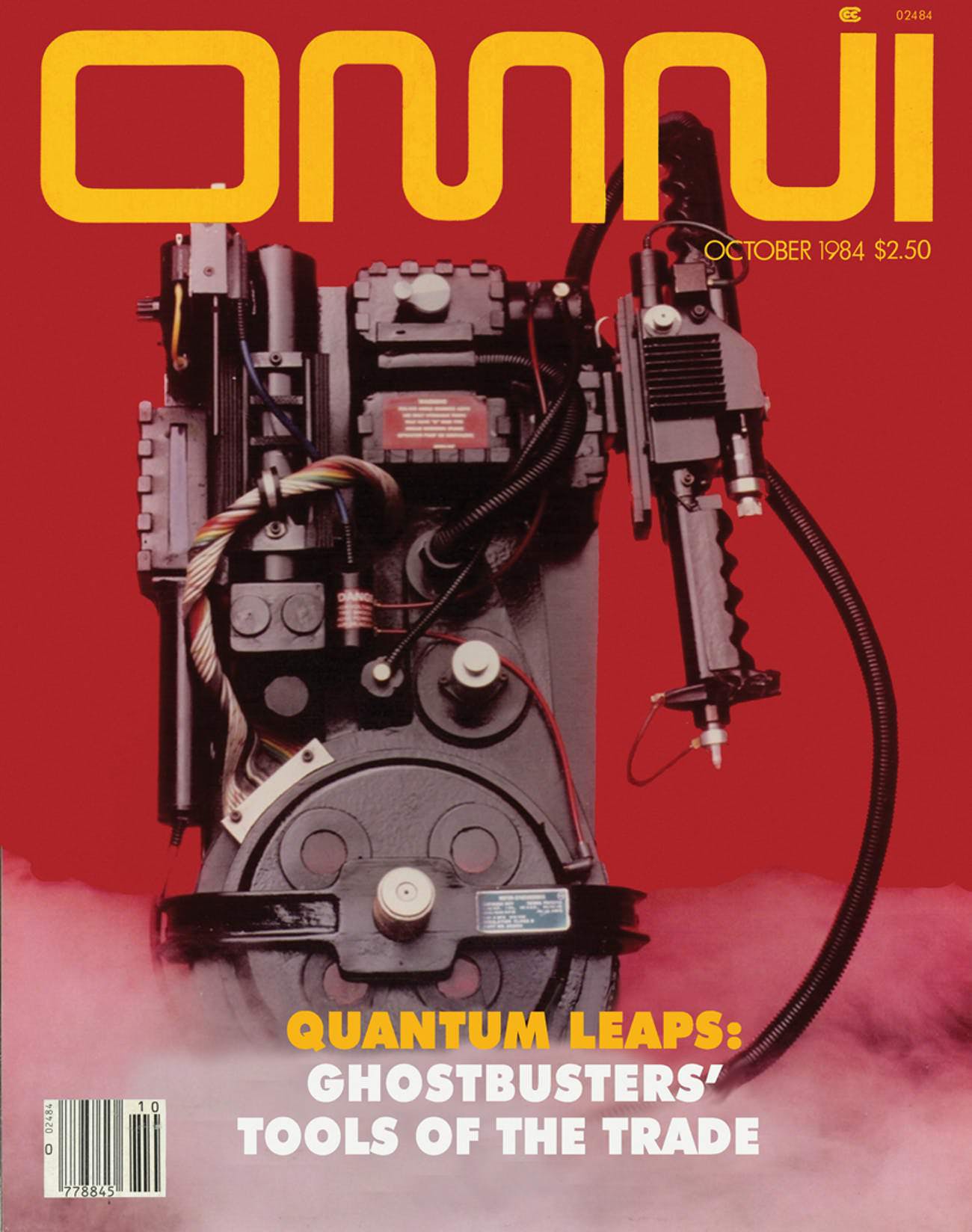 Actually, that's a reproduction as well - the lowest portion of the Pack is hidden by the fog just like the cover with the poorer-quality OMNI logo. It's also got a small logo and serial number above the OMNI lettering that isn't present on the screen cap from the movie.
deadderek liked this
What would Ryan do?

In this case, I am of the opinion that the best version of this project has already been done.

I don't know if he has them currently in stock, but check out Mack's Factory on Facebook.

Arron Mack offered an Omni Cover reproduction that was fantastic quality. He even scanned the real back cover and inside front/back covers of the actual October 1984 issue of Omni, and those are present in the folded print in case you want to track down an issue of Omni and wrap the phony cover around it.

And if you're looking for other newspaper covers from the montage scene, I recommend the ones by Paul Clark. You can find him on Facebook too. He just posted a couple of days ago in the Ghostbusters Franchises Worldwide group about having some copies left from his most recent run.

A video from last month on my latest acquisitions for 'montage covers'.

(note: that's no slight on Mack, I absolutely love his work--and logo--and the attention to detail his gear has. Which is why the omission is so surprising)
~ abritinthebay
A stranger in a strange land, an englishman in oakland.

And in the description, he does make this notation.

"DETAILS
- An idealized version of the prop.
- Worked from a 1:1 scanned image of the actual prop without removing fine details."

But is the lighter area in the film image possibly a highlight from re-photographing the physical prop? A glare on the hand-made, mocked-up cover, in other words?

Now it's quite possible he thought his source image was from a scanned prop (I've seen people make the same claim of that image) but it's clearly... not.

To add to that - there's also clipping of the pack where the original masked proton pack image was poorly magic lasso'd in photoshop that's consistent with the version above. The pack itself WAS scanned from the original prop, so that's probably where that idea comes from. The rest is not.

I actually spent some time fixing the poorly masked bits in my version above.
~ abritinthebay
A stranger in a strange land, an englishman in oakland.

Nope - it's distributed only over the red background and not on the proton pack itself. No color or luminescence shift.


Are you sure about this?

It would mean that a light was placed behind the proton pack (in between the pack and the red background) to just light a hotspot on the background.

If the light had been placed behind the camera (and was lighting the pack and the background) you would see shadows on the background.

Or it was painted on the background, that’s also a possibility of course.

It seems a lot of trouble to go through just to put a hotspot on that red background.

To me it looks like a simple hotspot from the light lighting the magazine cover. It’s almost impossible to light a glossy magazine cover without a glare/ hotspot. And the top right quarter of the pack (and the edge of the pack facing the rotating handle) has a uniform circle of brighter exposure the same size as the background hot spot.

I’m not at my pc at the moment but if you take the original prop screenshot above in photoshop and decrease the exposure until it is almost entirely a black image, if the last part to turn black is a circle centered around the top right of the pack then it is a hotspot on the magazine paper and is a uniform red color in reality.

Reply
Return to “Other Props”
25 Jan

Appreciated but I have tried printing off scanned […]

You may have to rehost the image at imgur or flick[…]

Another day another minor update. I threw togeth[…]

Generally positive reaction from everyone I have c[…]