By cristovalc -  January 8th, 2020, 6:42 pm
-  January 8th, 2020, 6:42 pm#4929856
Hey all, I'm far enough along on my Spongeface belt gizmo build that I thought I'd share! I hope this thread proves useful to all the other rookies out there who feel a bit out of their depth when it comes to this build. It turned out to be a lot of fun and I started with absolutely zero experience when it came to soldering and circuitry.

I've consulted both Spongeface's excellent instruction manual and bishopdonmiguel's great build as well, and if there is any advice I can impart on my end it's that YOU SHOULD ABSOLUTELY READ THROUGH EVERYTHING FIRST, because I made some real bonehead mistakes that could easily have been avoided by not rushing in as if to be the fool. I also may have breathed in a bunch of lead fumes because I was too lazy to grab a fan but anyway let's get going... 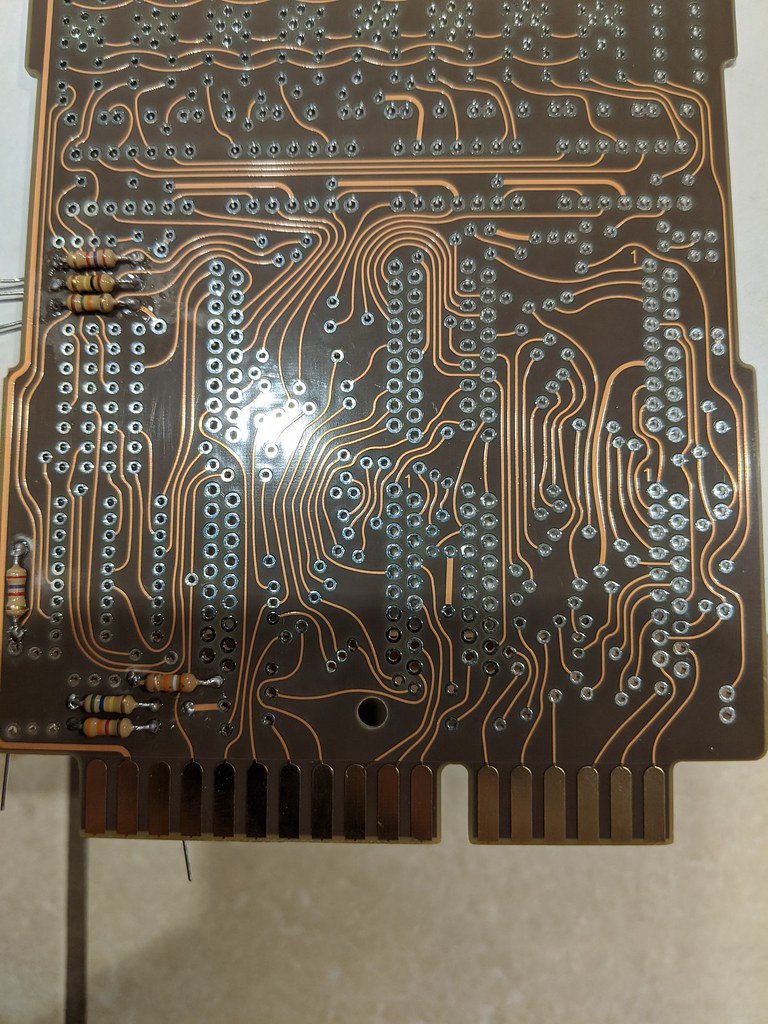 I started with the resistors and not with the daughterboard as recommended, so already this was where I made rookie move numero uno. Did you know you solder bits to the board from the back side? I would have known this had I not been a chump. This caused some real problems down the line because I had to go and clean up a lot of the mess that comes from doing it this way after the fact... 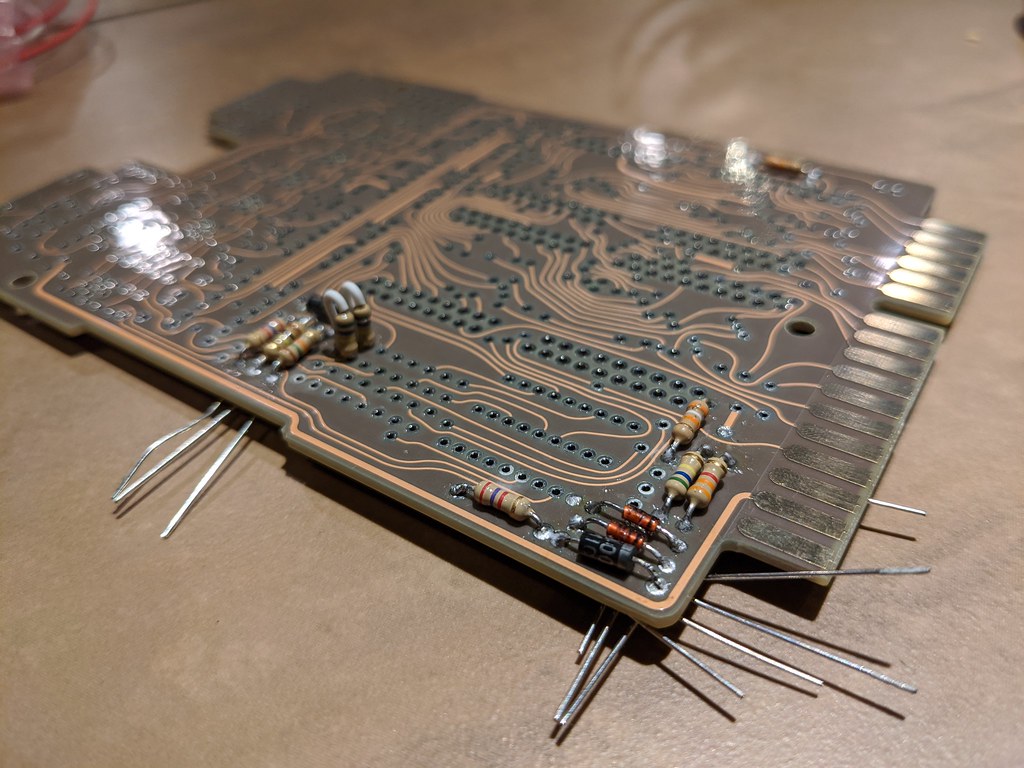 Next up was the standing resistors. Because I was still soldering from the top of the board I melted some of the plastic covering and I'm sorry it looks so gross! I'm sorry I did this to your beautiful creation!

It also caused issues where holes would get plugged, or the metal ring melted right off so I had nothing for the solder to grab on to! I improvised by just cutting the lead to the appropriate hight, then building up a long thread of soldering material to it, and wrapping any exposed bits in more plastic wait no come back don't leave! 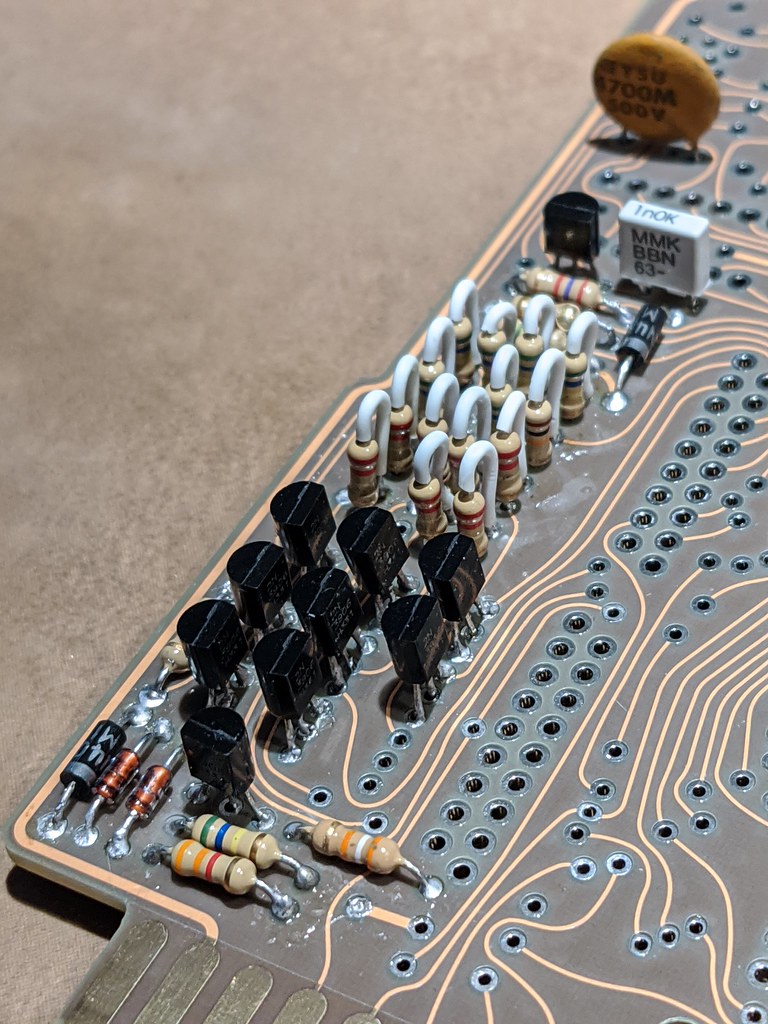 It was at this point my friend suggested that it's much easier if I flip it and solder from the correct side. "NAH!" I said, "top all the way—it looks more authentic!" (actual quote), so I continued on with the transistors until finally something snapped in my brain, and I wondered why all other circuits didn't look like melty piles of garbage. "Ah! If only I had been warned..." I said as I angerly flipped to like the first g-d paragraph of Spongeface's very, very intricately detailed instructions. D'OH! 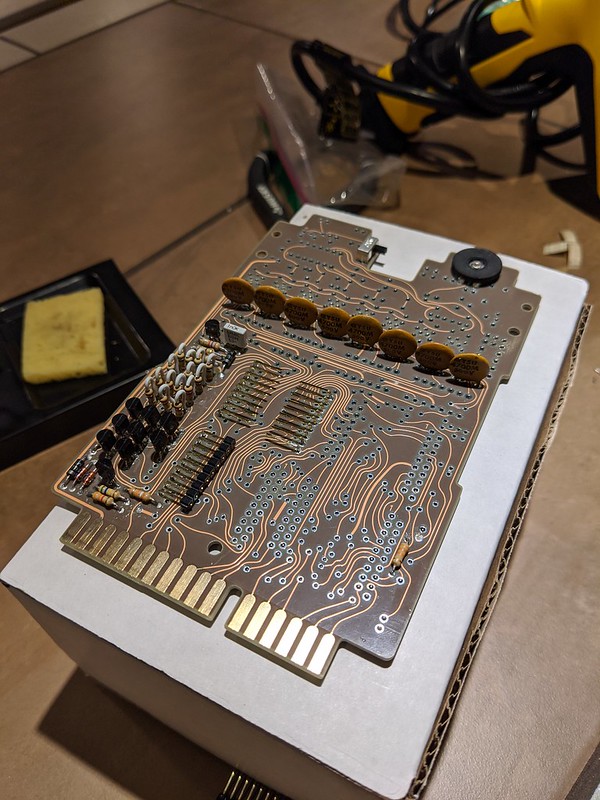 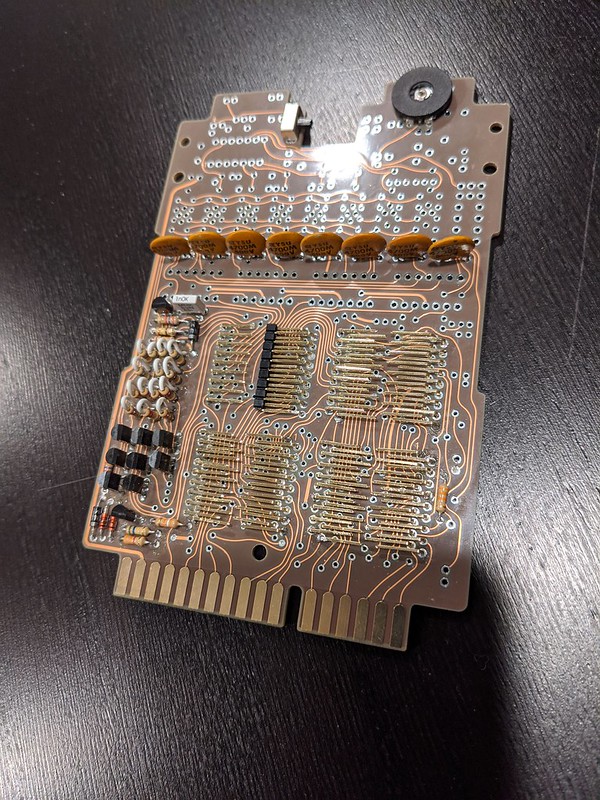 Things were starting to go smoother now that I was approaching it the correct way or so I thought. The next bit was the dreaded gold pins! Heating up the plastic casing was easy enough and shimmying them into position was fine, but I still bear the battle scars to this day of trying to pry off the black bits as they start to stack up on one another! These sumbishes were tough, and I ended up having to reposition 90% of them one-by-one because prying off the plastic sent 'em flying, even when soldered in place! I also ended up positioning them a bit higher off the board than the recommended flushness, but this is one mistake I actually didn't mind! It gave a bit more dimension to the board. 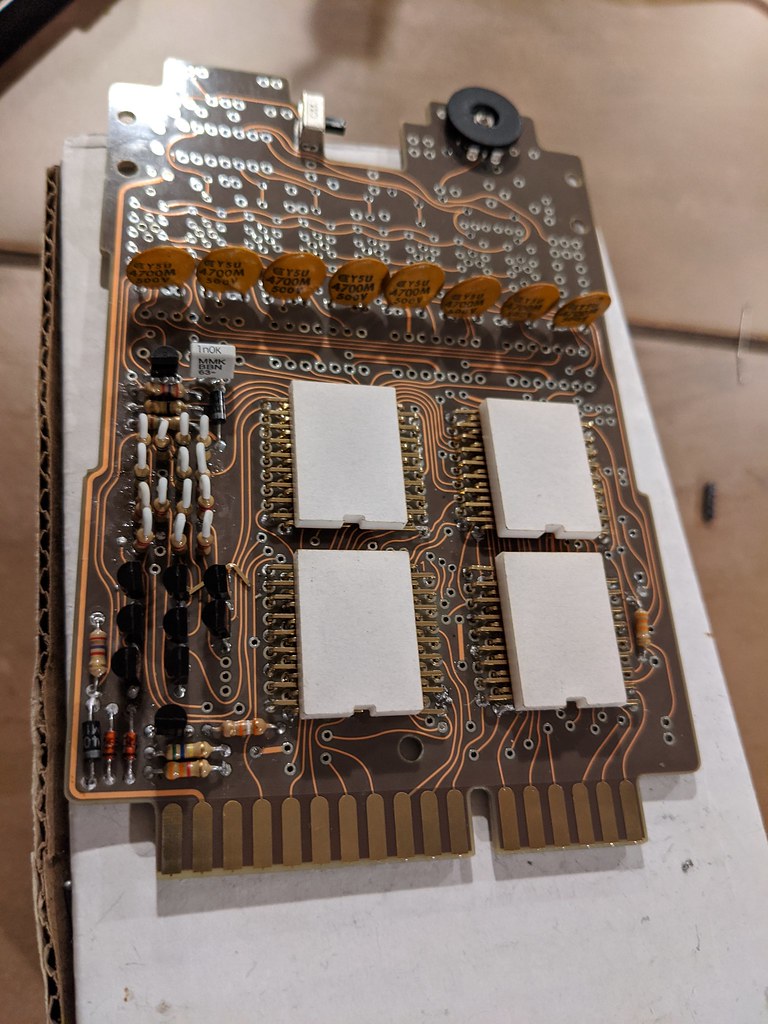 These were fine, everything was fine. Super glued on and I took the extra time to make sure they were lined up semi-decent (after making sure they were flipped the correct way)! They weren't lying when they said you only get about 3-5 seconds of adjustment time before it sets for life. Having the white chips in place gave me some more time to line up the pins a bit better as well now that they had something to be flush against. The black boxes I didn't quite get the chance to line up as great due to the glue drying but OH WELL GOOD ENOUGH.

At this point I embraced any jank that came up as part of the charm of the whole thing. The Ghostbuster ensemble ain't exactly passing the Jony Ives quality standard if you know what I'm sayin'. 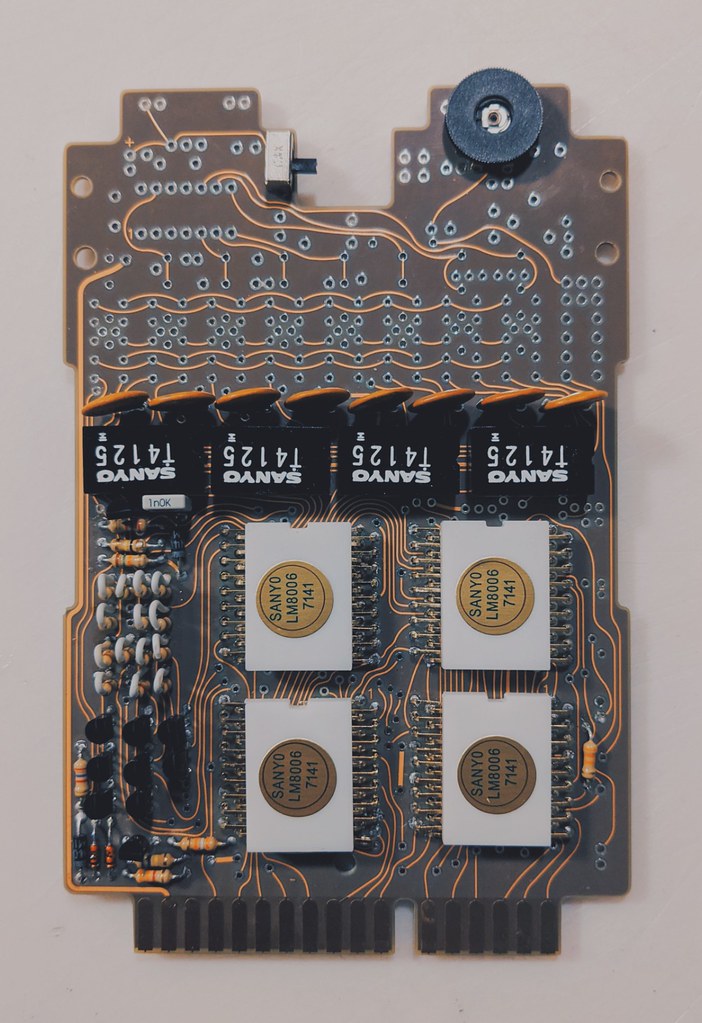 Sticker time! Oh yeah, look at me getting so confident I'm like framing my shots and using filters and stuff!

OH YEAH! I got so cocky with my new found soldering powers that I skipped ahead a bit and started putting on the bits at the top. The bits that actually do stuff! Don't cut yourself on my edge! (I cut myself on many of these edges) 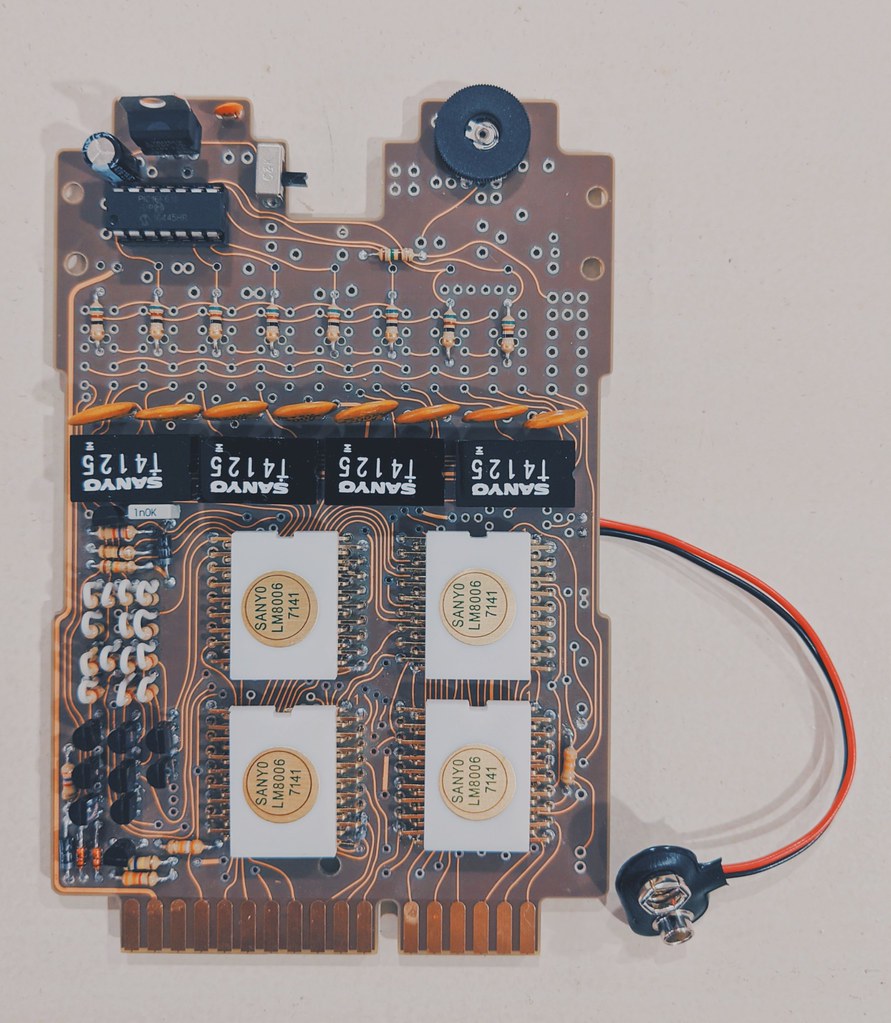 More stuff added! I'm glad I worked my way up from the bottom (literally) on this, as the marked improvement really shows! I was nervous about the functional bits but it was hella easy. You got this rookie who is also maybe reading this! 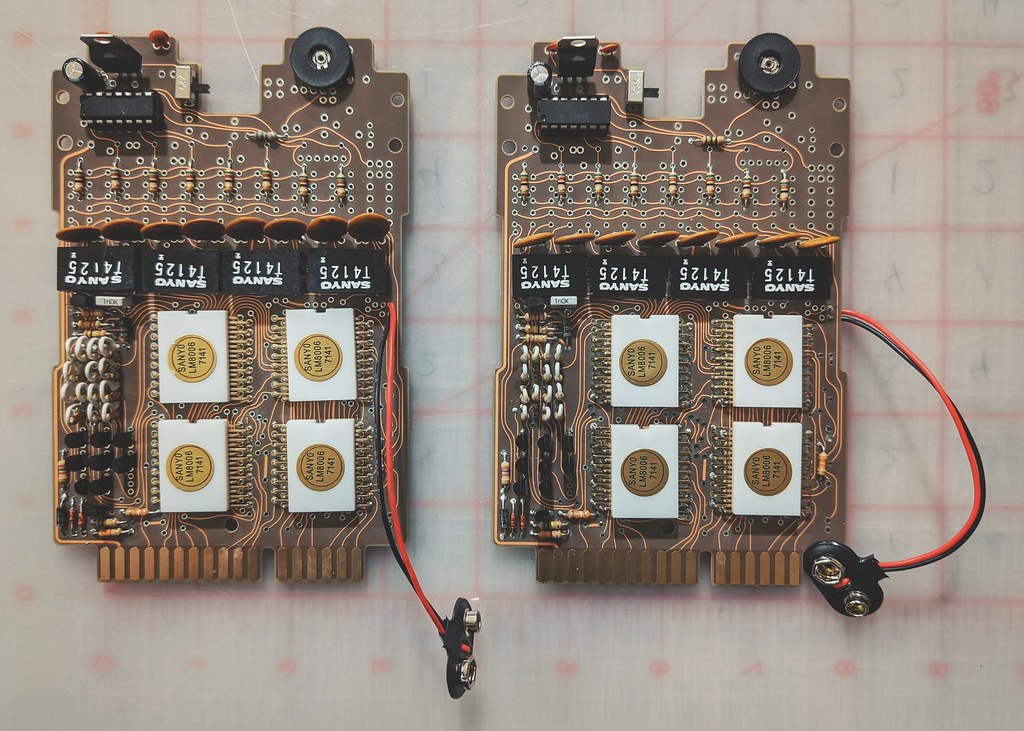 HAHA, I was building two along with my friend this whole time. This is about the point we caught up with each other and it was time for the ultimate test of whether we janked it up or not... 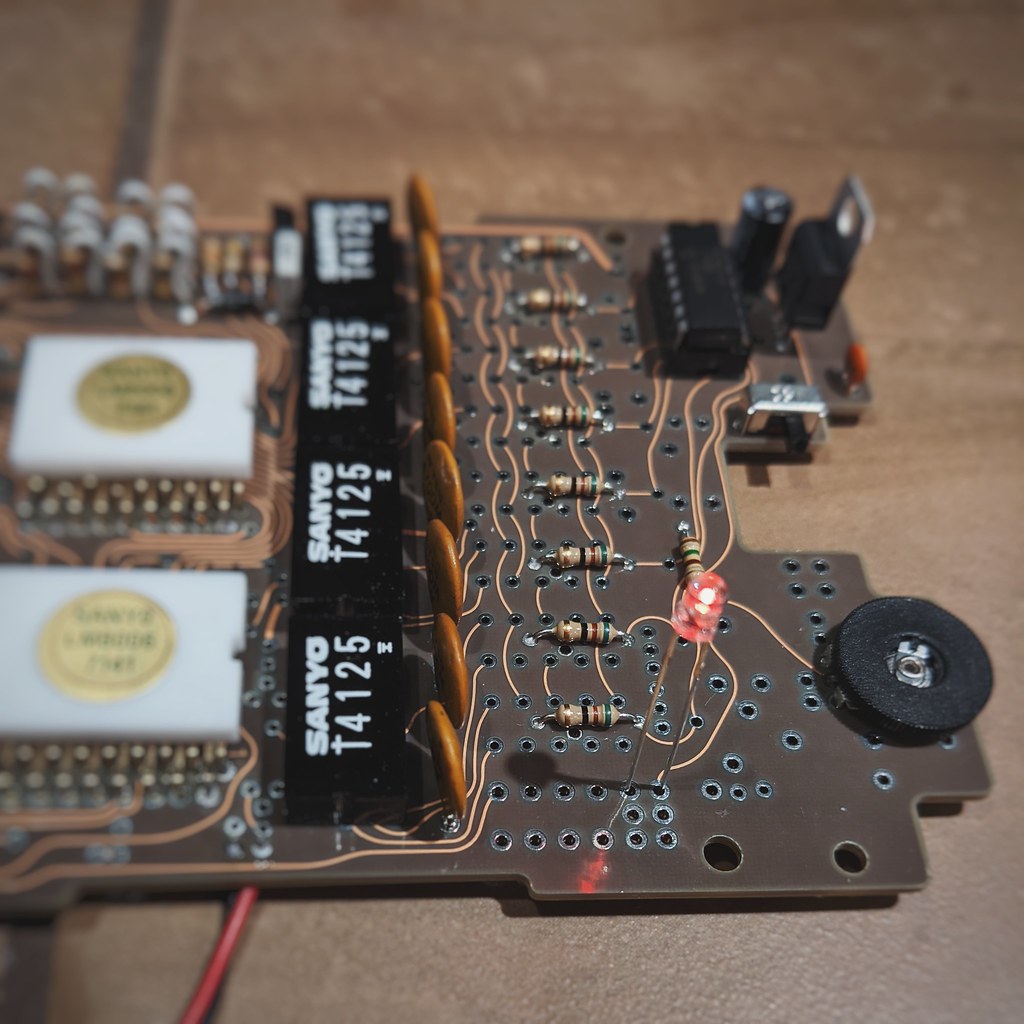 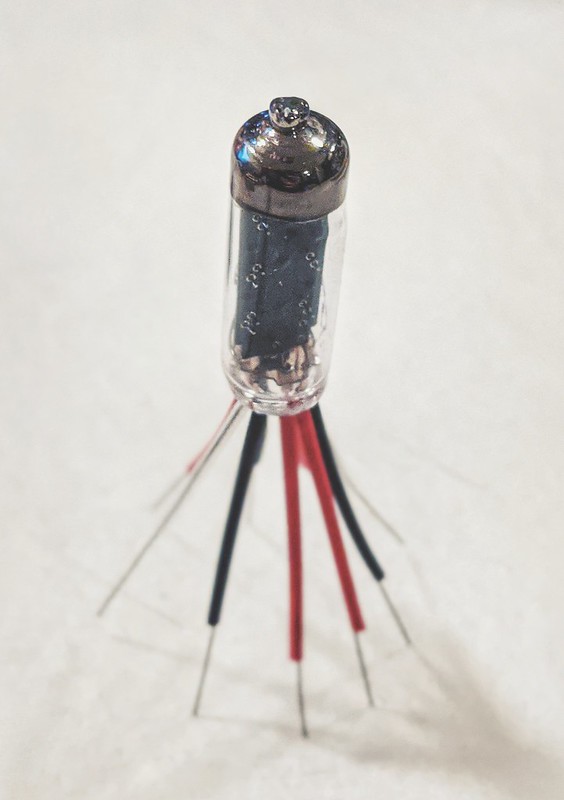 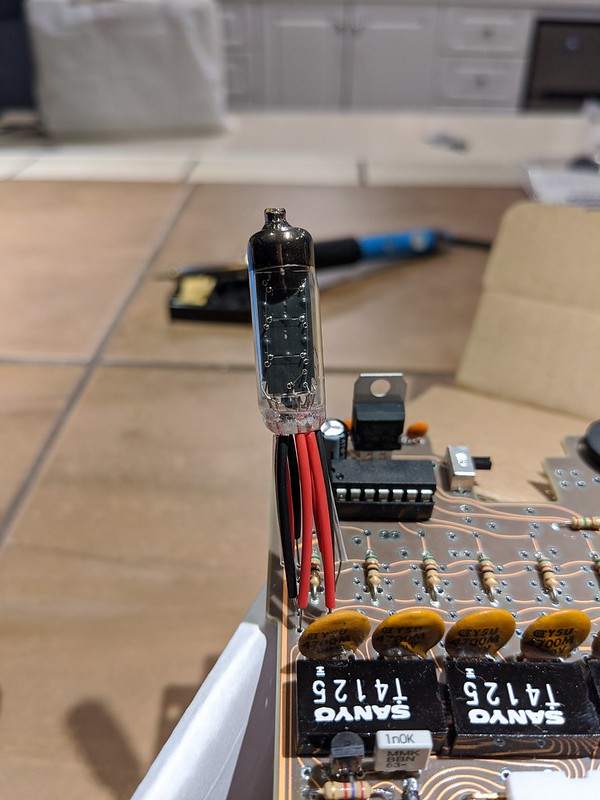 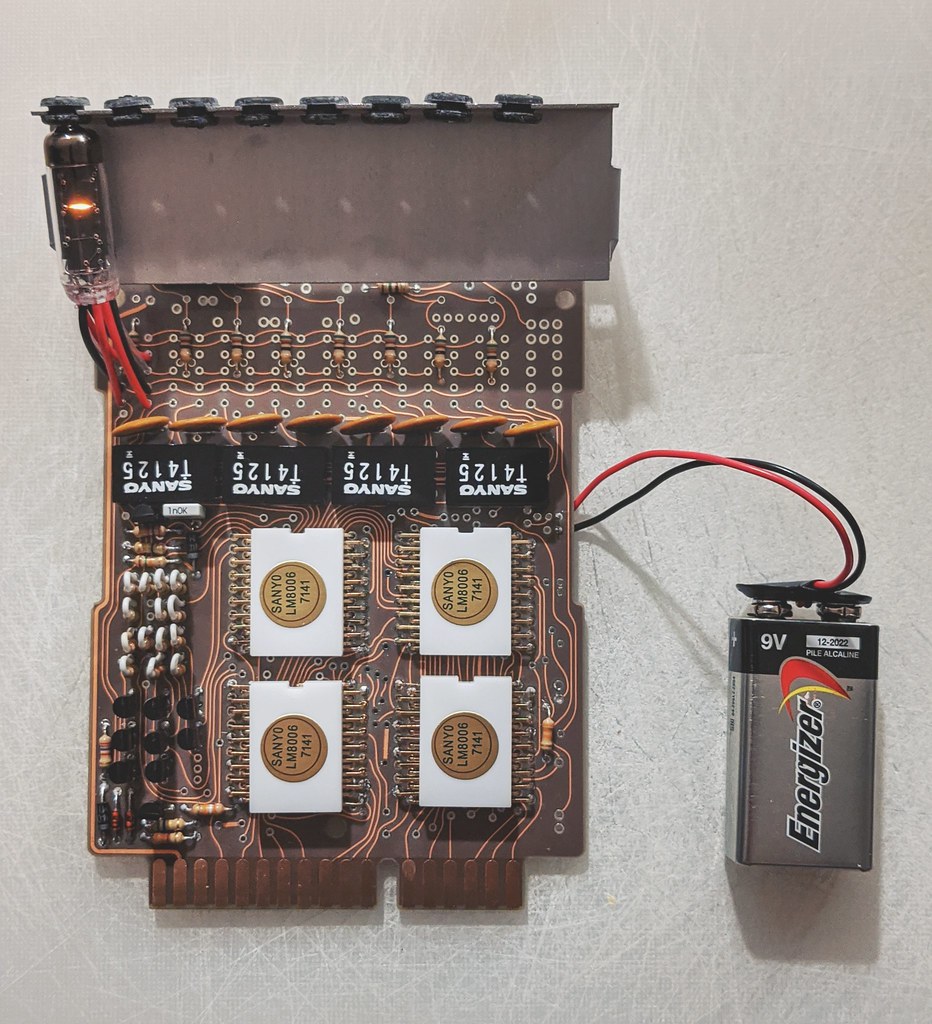 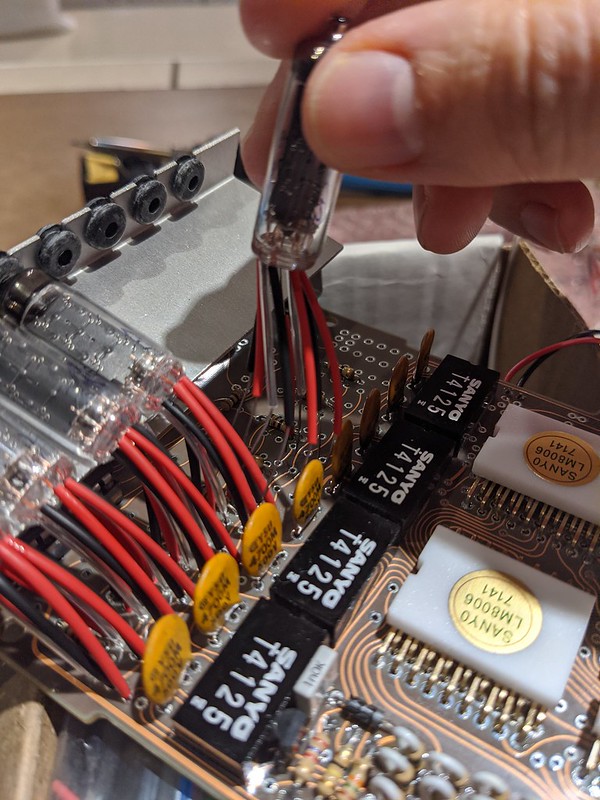 The nixies were the most rewarding part! I ended up pushing ahead and doing most of them in a night as it was a really nice relaxation tool. Lining them up properly with the holes was a bit of a pain for the first couple, but after that you kind of get the feel for the correct way you should be bending and positioning them. Got them as close as I could and then tweaked 'em around with tweezers.

And that's where I stand so far! I'm hoping to burn through the rest in the next week and then it's off to build the Charlesworth ghost trap! 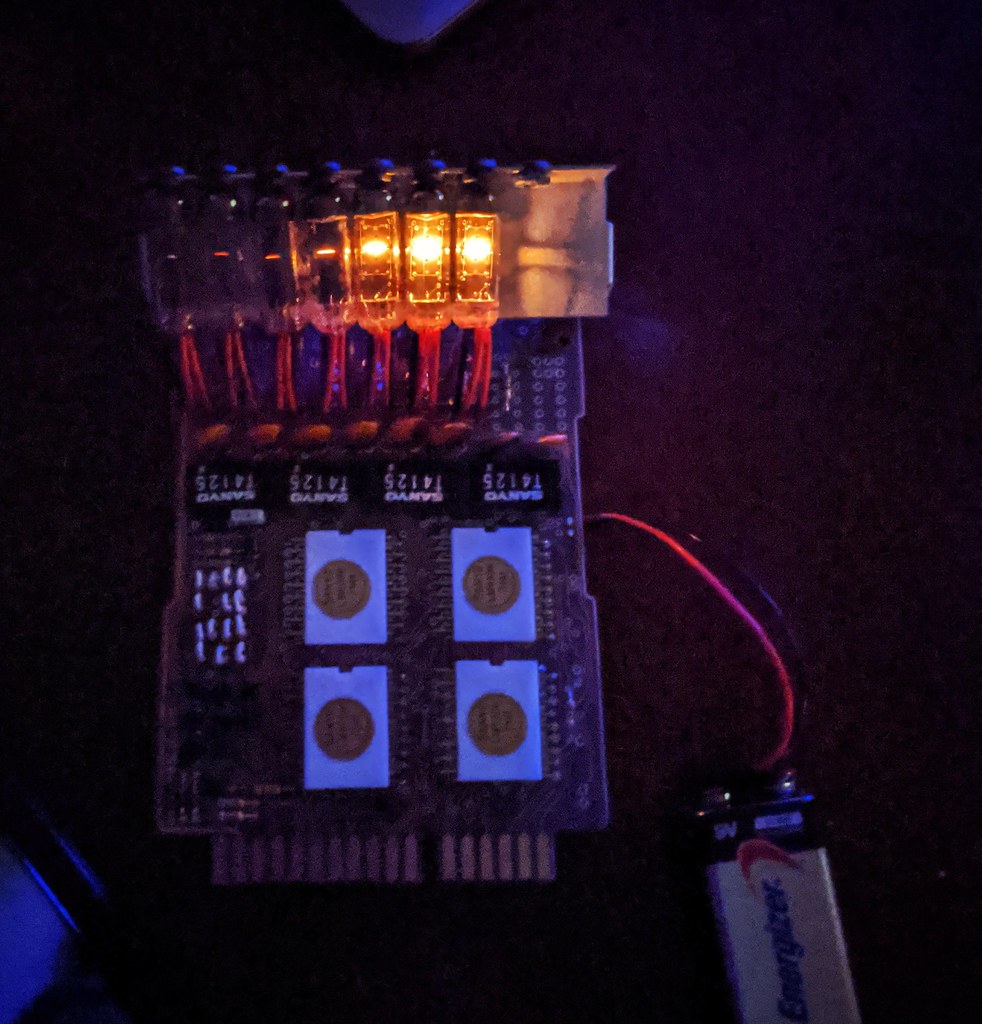 I'm super glad I started with the gizmo because it taught me to have the patience I will need going forward with the proton pack and other ghost fighting accoutrement. Thanks for your great work putting together this kit, spongeface!
RedSpecial liked this
Belt Gizmo Build: viewtopic.php?f=7&t=46169 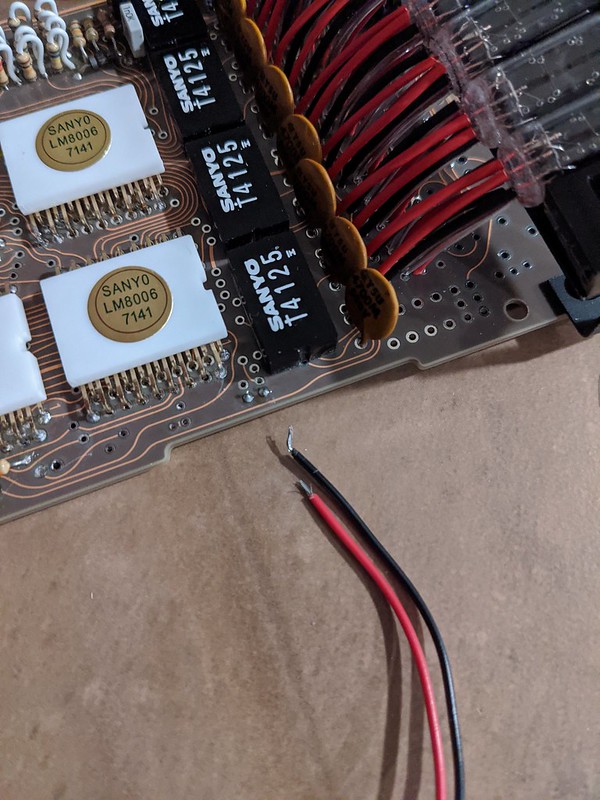 Oops! The 9V connector is as flimsy as warned and I had 'em bust off on me twice (once even after glueing them!), so with the amount of cable available on the original becoming smaller and smaller, I bought a longer connector and will wait until the full board is done and connect them to the secondary inputs at the top of the board, along with a heftier amount of glue! Thank goodness for the two connection options! 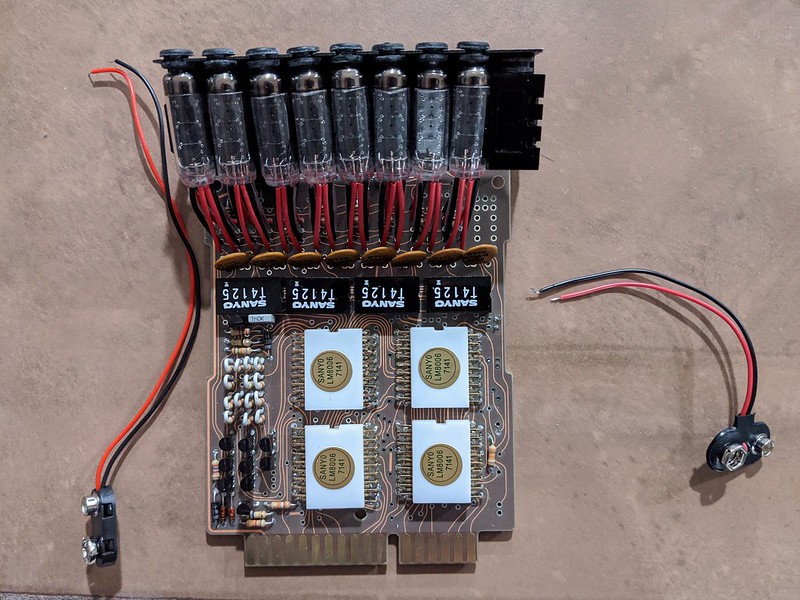 The second problem arose when trying to jam the LED and wiring into the Error box. With a lot of pushing and pulling the wires would become disconnected from the LED and would require additional cutting and re-soldering. I ended up running out of shrink wrap and appropriate wire lengths to continue, but thankfully these two things are easy enough to acquire at any hobby/hardware shop. Grabbed some more and will continue on later. 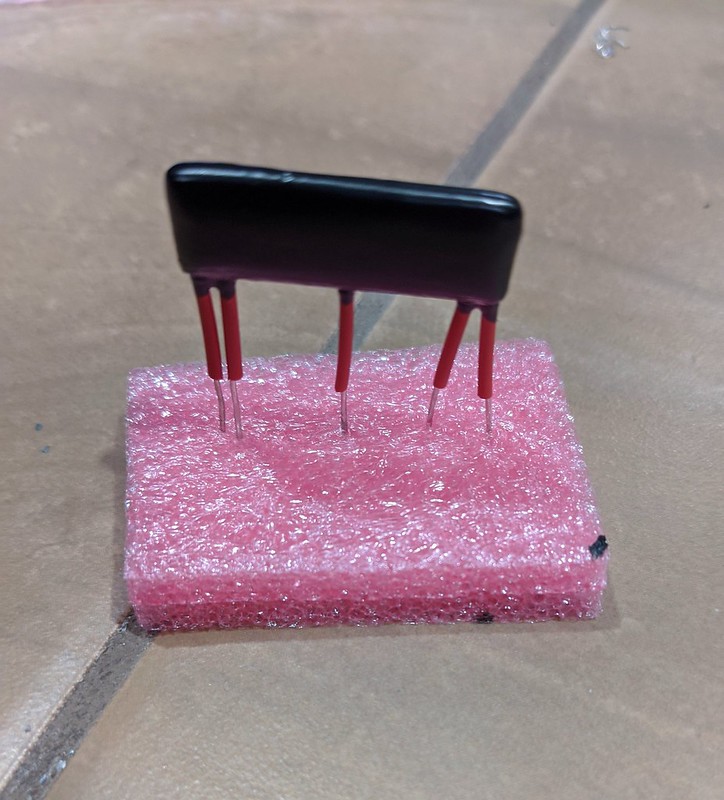 The last bit of the mobo was the little "pillow" transistor(?) thing(??), and it was actually the easiest part this go round, even though it too needed a couple passes before I was happy with it. The first time around I didn't quite drill the holes deep enough, so even with superglue applied the wires easily broke when trying to bend it in place. The plasti-dip also had quite a few bubbles, which was caused by (a) not stirring it enough and (b) dipping it in and out too quickly. I'd recommend a slow dip in (think end of Terminator 2 pace), hold for 5 seconds, and then a slow rise out. It will only need about 2 dunks to remove the 3D print detail. If you mess up, the cured plastic can be easily sliced open with a knife and peeled off for round two. 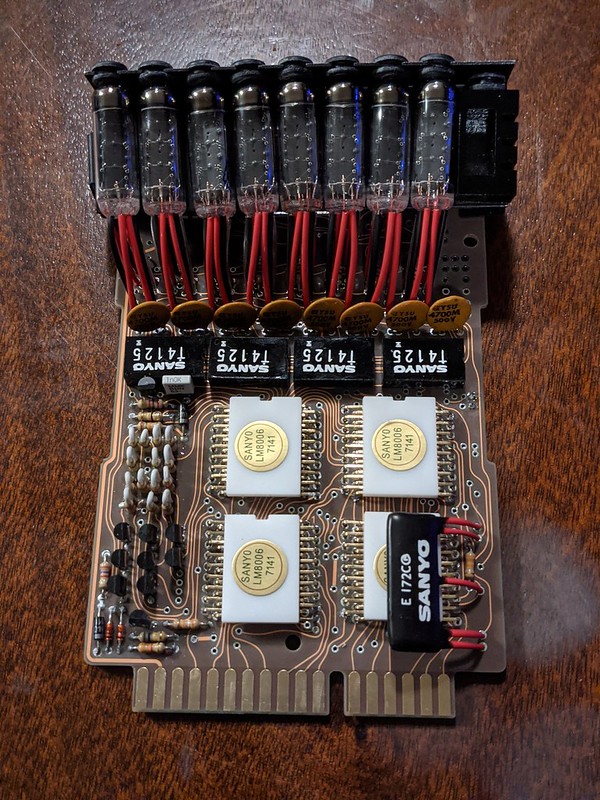 Daughterboard is next then we are finito!
Belt Gizmo Build: viewtopic.php?f=7&t=46169 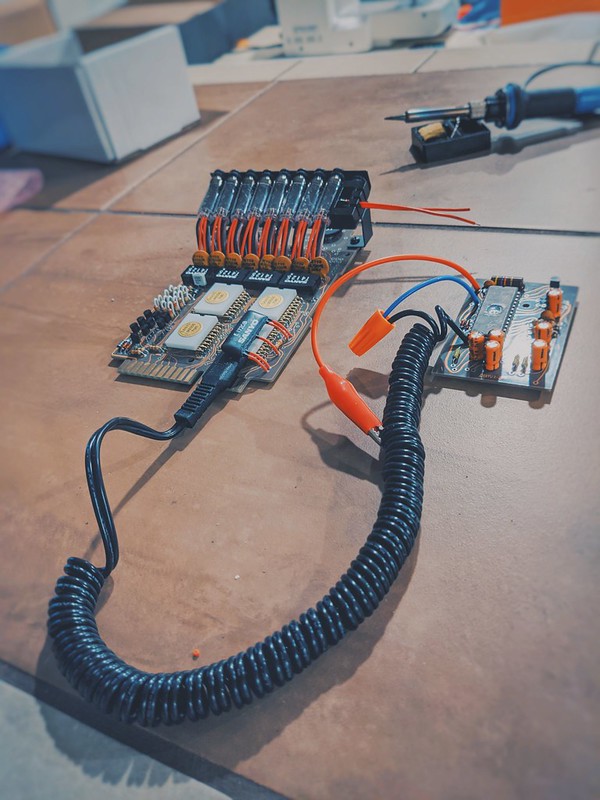 I ended up blowing up the LED (didn't know that could happen on this??) by using some substandard wire. I found some 22 AWG wire that was the finer "hair" like style and boy oh boy did it not work as planned... I'll seek out more or the "solid" single wire that was provided and continue on. I just miiiiight have enough left over to finish the job but I don't trust myself. I blew through too much of the original stuff by making mistakes pushing the wire through the LED box and on the pillow-resistor thing. 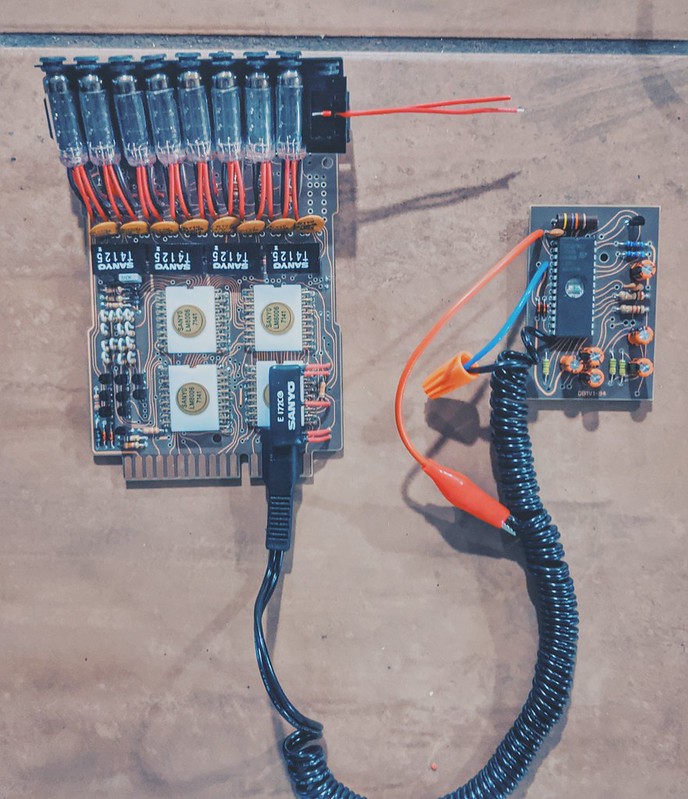 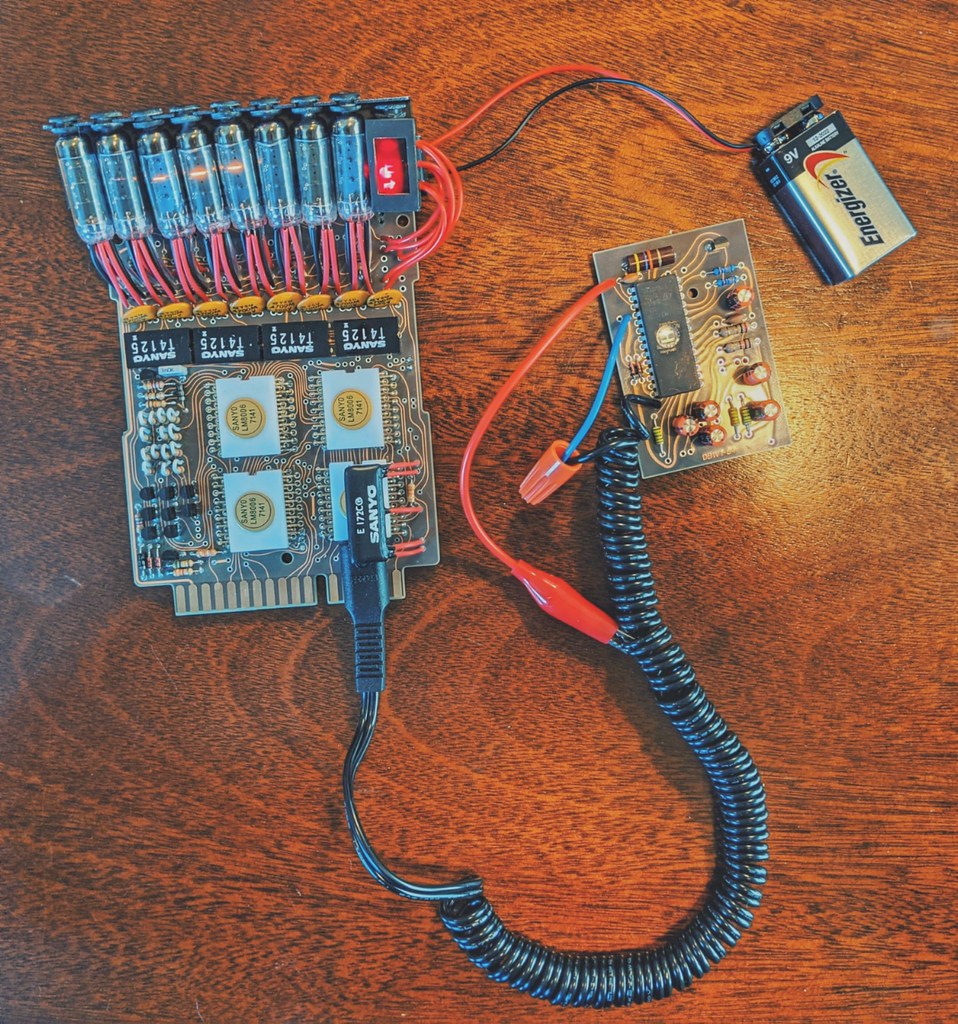 She's all done now! I'm gonna some velcro to the underside of the daughterboard and needs the hook, but it's like, pretty much done yeah! Replaced the LED with a standard red 3mm and crammed it on in there. This was a barrel of fun! I'm itching for more so it's on to the ghost trap.....
Belt Gizmo Build: viewtopic.php?f=7&t=46169

Where are you all tucking the battery for thing in to? Just the utility belt or do you loop it on the inside of the holster? Also thinking of using velco on the motherboard and holster to keep it firm in place...
Belt Gizmo Build: viewtopic.php?f=7&t=46169 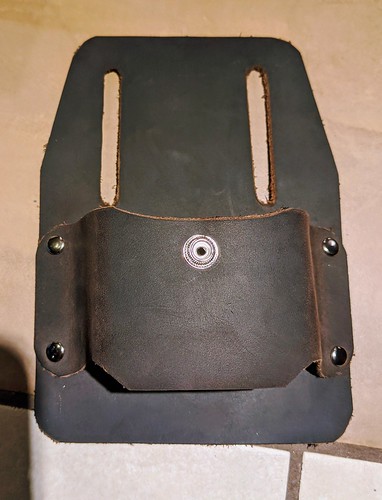 Fits snug as a bug in a rug. 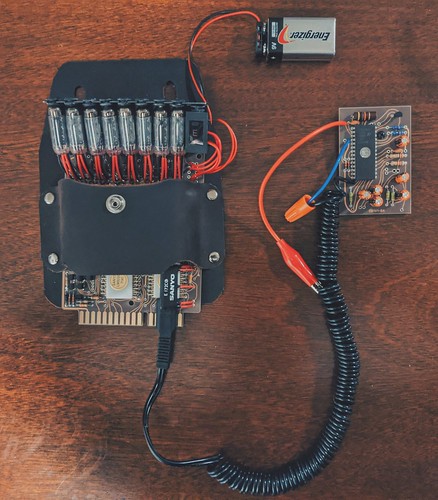 Spongeface was also kind enough to send me some replacement resistors to swap out for the ones I mangled. I didn't take photos of this process as it involved a lot of burnin' and cussin'. Don't try to replace resistors folks, do it right the first time! 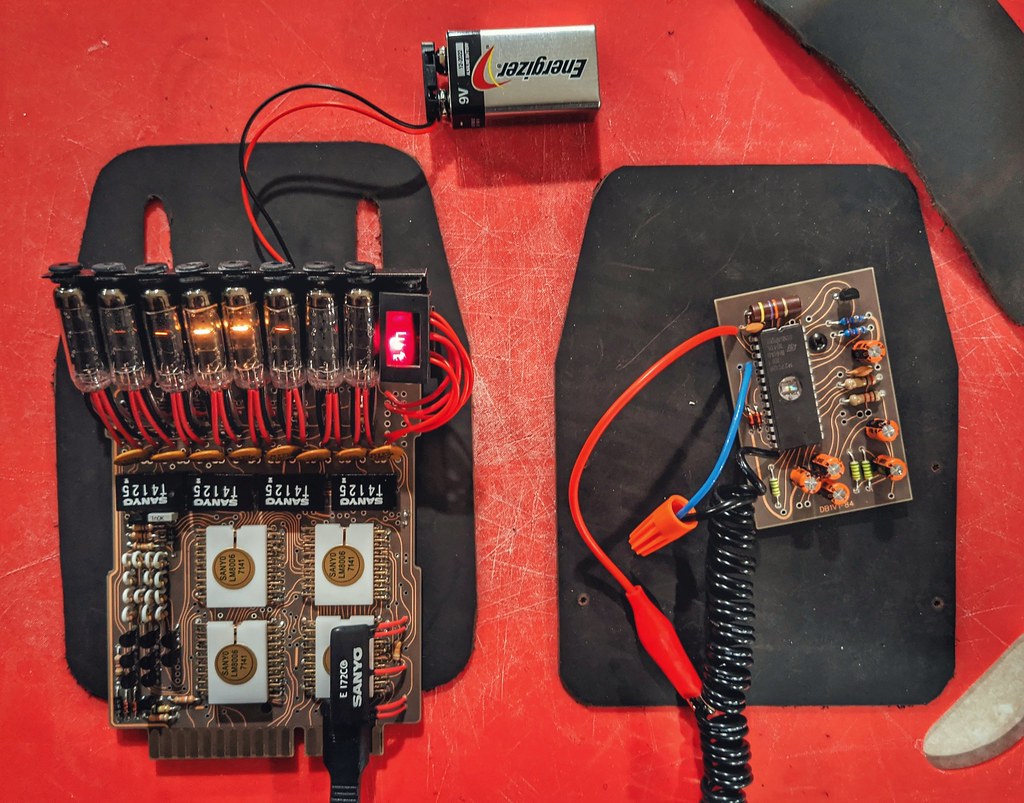 You can't see said handiwork because of the holster, but my brain can and it was OCD as shiz. For the small gold bands on top of the white chips I just some foil pineapple stickers and sliced 'em thin. Cost me $2 and was by far the cheapest part of this process. 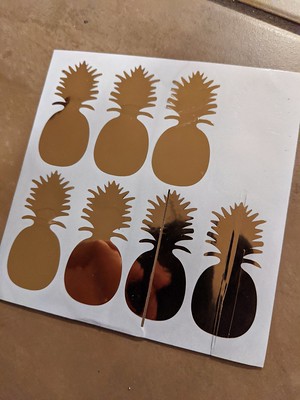 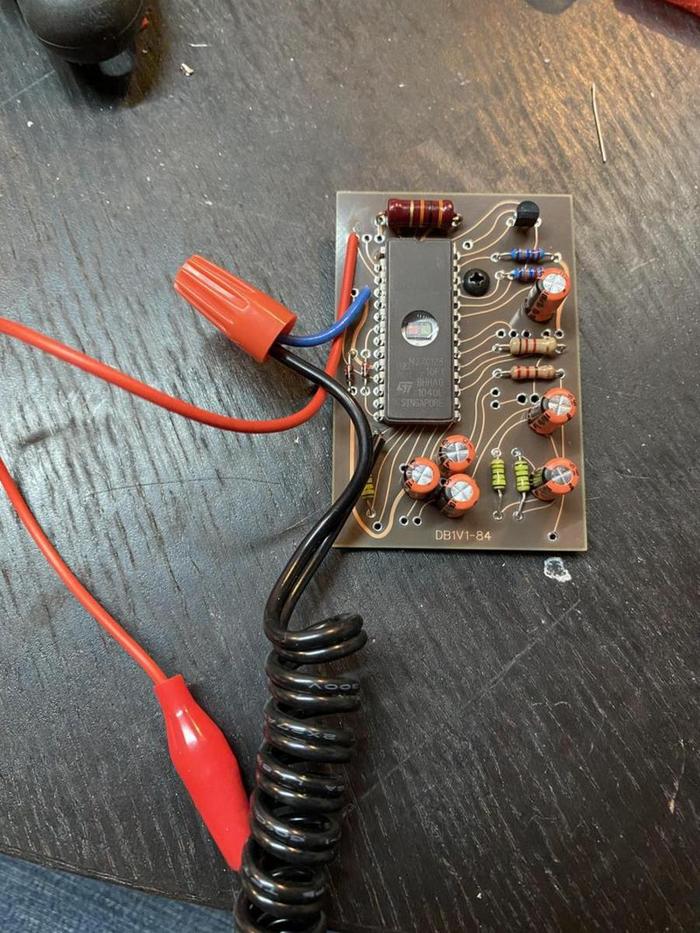 Getting ready to start on the main board tonight!
cristovalc liked this

Made a ton of progress on the board last night. Oh my god, those gold pins for the white chips. Was pretty lucky with only one or two of them being loose in the end, but the heating and pushing on those black spacers to get them ready for mounting was quite the challenge. 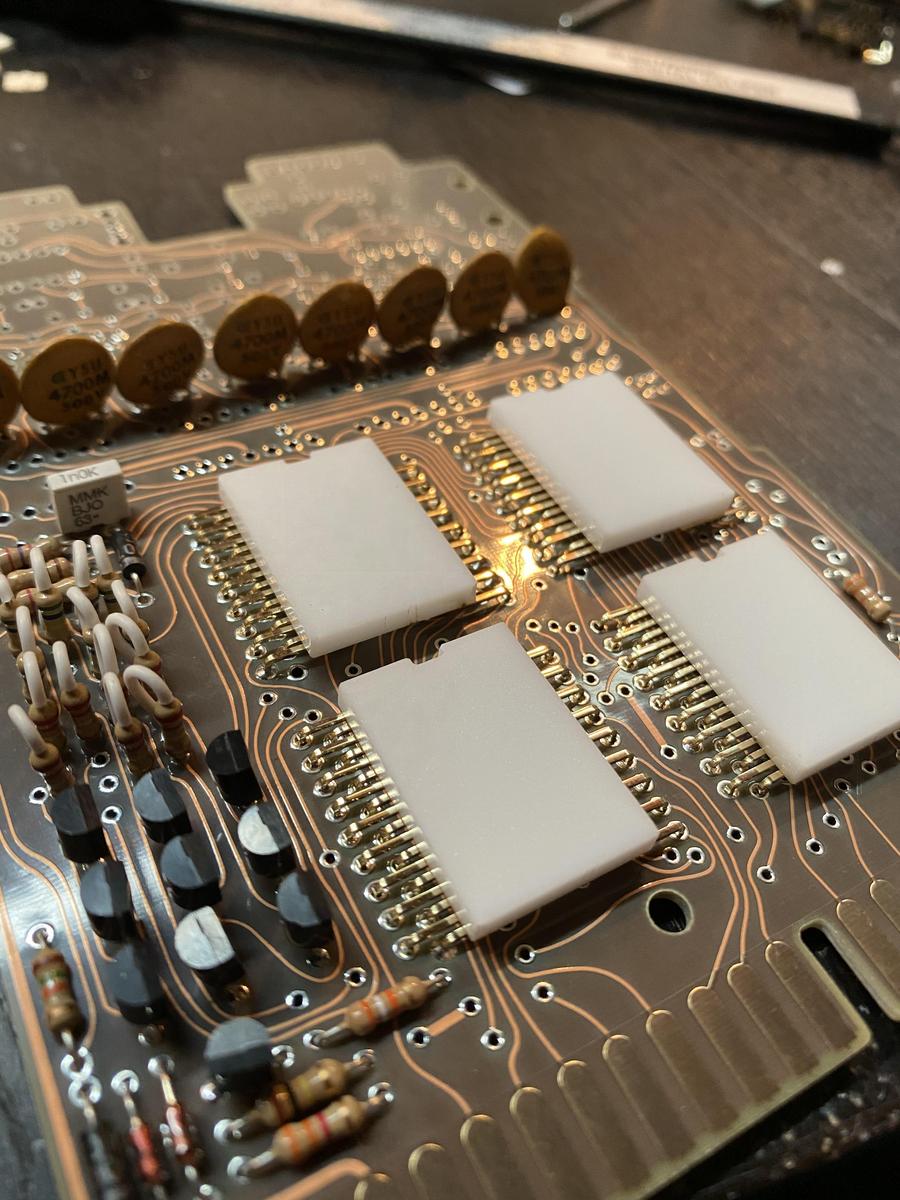 Still amazed with this kit, and it's a HUGE improvement over the basic one I'd been rocking for the last few years. 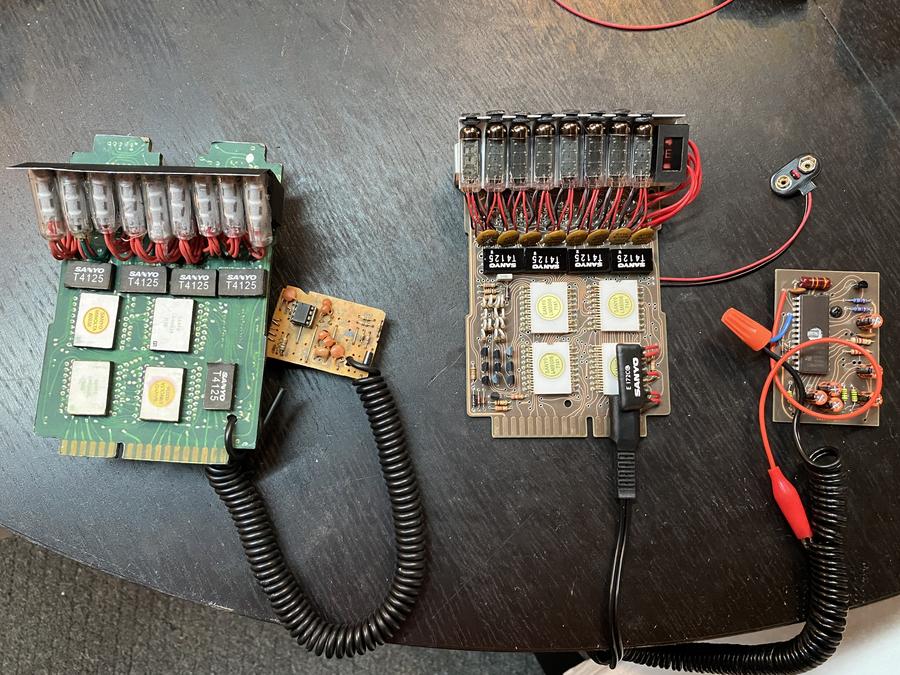 Just waiting on a new holster to arrive from Tyger Cheex!
cristovalc liked this

By cristovalc -  February 12th, 2020, 10:49 am
-  February 12th, 2020, 10:49 am#4931070
Great work! Nice loop-de-loop treatment on the alligator clip. Didn't really know what to do with mine so I just trimmed it down some so it wouldn't get snagged on things. The black caps are definitely something I wish I would have planned a bit better for too, but yeah the glue does not leave time for adjustments.
Belt Gizmo Build: viewtopic.php?f=7&t=46169

This was a great build with you CristovalC, looking forward to our progress on the ghost traps and then onto the pack!
cristovalc liked this 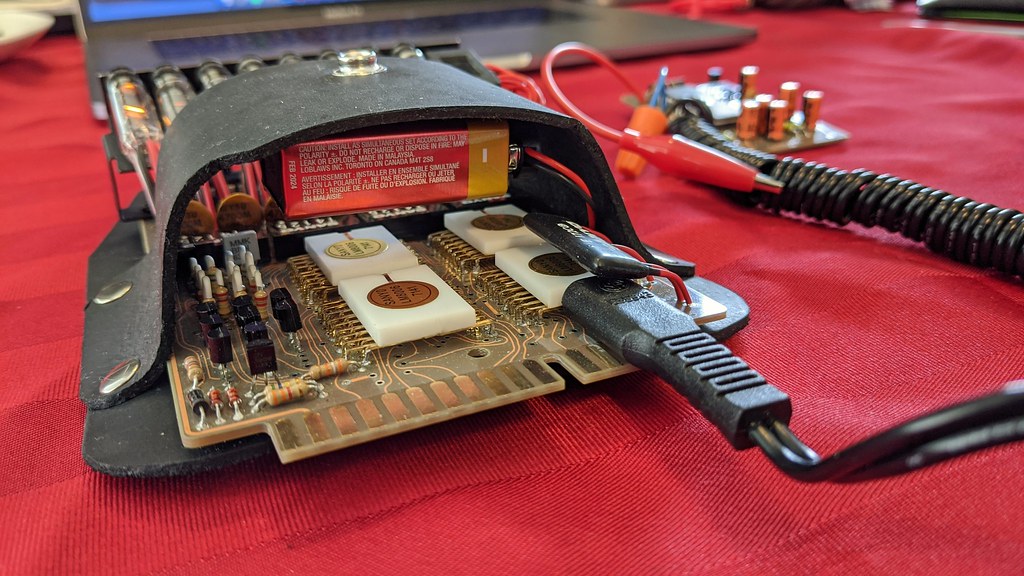 Also, if anyone is interested Adam Savage is currently speeding through a build on this here: https://www.youtube.com/watch?v=p4odzVGI9oQ
RHansen liked this
Belt Gizmo Build: viewtopic.php?f=7&t=46169

Reply
Return to “Other Props”
19Jun

Thanks for posting this. I am in the process of do[…]