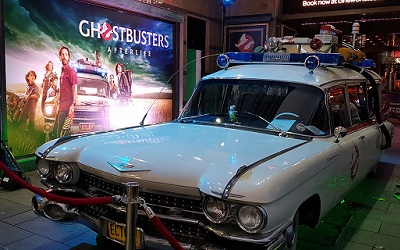 With the countdown now at 15 days to the general release of Ghostbusters: Afterlife, Sony Pictures is now entering the final phase of its marketing campaign for the new movie, including a series of advance screenings... The latest of which took place earlier tonight at Cineworld's Superscreen in London's Leicester Square, complete with a replica of Ecto-1 parked outside.

Inside, the multi-media screening was once again introduced by writer-and-director Jason Reitman, his co-writer Gil Kenan, and original Ghostbusters Director and Ghostbusters: Afterlife producer, Ivan Reitman, who went on to interact with attendees at the event following the screening.

The event was also attended by members of the UK's varied Ghostbusters costuming groups, who appeared to have had an enjoyable evening:

I laughed, I cried, I smiled til my face hurt. Best cinema experience in years!

Ya'll won't be disappointed in the movie!

This event is separate to the full UK premier, which we are told is scheduled for slightly later this month.
RedSpecial, dudeurock liked this
Feeling overwhelmed by the Covid-19 pandemic? Please visit The Support Thread.