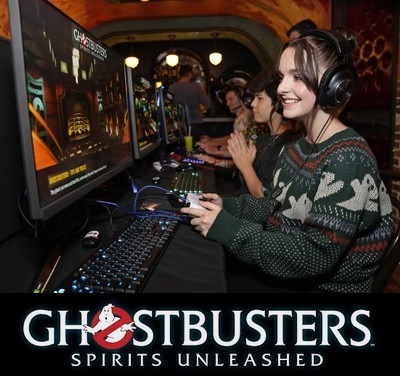 With only five days to go until the release of Ghostbusters: Spirits Unleashed, game developer Illfonic held a launch party for the game last Friday night, and in addition to members of the press, and lucky members of the Ghosthead community, the event was also attended by notable alumni from the Ghostbusters theatrical world: Ghostbusters: Afterlife stars McKenna Grace and Logan Kim, as well as director and scribe Jason Reitman and Gil Kenan.

In addition to a gift bag of goodies, those in attendance were also treated with the chance to get hands-on with the new game, thanks to a massive LAN party rig which was set up at the The Django, a speakeasy-style jazz club located in the basement of Tribeca's Roxy Hotel, mere blocks from Hook&Ladder №8.

Attendees to the event remain tight-lipped, but one notable detail to emerge was the inclusion of Mick Smiley's Magic, as revealed by Jason Fitzsimmons at GhostbustersNews.

Those in attendance slugged it out with some pretty pesky digital poltergeist, then stayed on to dance the night away with a selection of old favorites from the movie soundtracks thanks to on-site DJ Questlove.

Ghostbusters: Spirits Unleashed is due out on October 18th, and will be available for PlayStation 4, Xbox One, Microsoft Windows, Xbox Series X and Series S, PlayStation 5.
mrmichaelt, DancingToaster liked this
Feeling overwhelmed by the Covid-19 pandemic? Please visit The Support Thread.

Man these two are going all out for Ghostbusters. It seems they’ve been out doing the rounds for a few weeks. Good to see. They were easily the best thing in GBA
Kingpin, DancingToaster liked this

I did some quick research and maybe we shouldn&r[…]

I'd guess Muncher might be able to sabotage Packs […]

Bring your LEGO Firehouse and ask them to recrea[…]