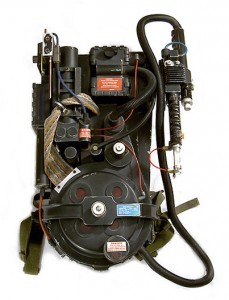 The Proton Pack is a fictional piece of particle accelerating machinery created by Egon Spengler and used by the Ghostbusters. It is their primary tool in the 1984 & 1989 Ghostbusters films for "busting" ghosts. It has a hand-held wand ("Neutrona Wand" as scripted by Dan Aykroyd) connected to a backpack-sized cyclotron. The theory is that it fires a 'semi-controlled' stream of protons that neutralizes the negatively charged electromagnetic radiation of a ghost allowing it to be held in the active stream.

The packs were first tested in the Sedgewick Hotel, which was also the test run for the Ecto Goggles and Ghost Trap. 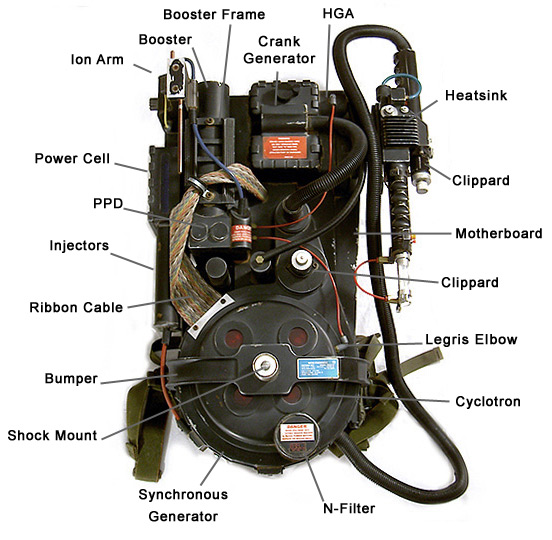 Very few parts of the proton pack were ever named in the original movie. In fact, within the first film itself, the term proton pack is never heard, although the name "positron collider" is used by Venkman, a term corroborated by Dan Aykroyd in archival interview footage seen in the 1999 visual effects featurette on the DVD. A few terms for specific parts were introduced in the novelization and the Real Ghostbusters cartoon. To aid the community in discussing the pack and its components a group of fans made up and agreed on a list of names for all the Proton Pack parts. These names have since gone into general usage by most of the fandom. The names of each part of the Proton Pack were invented by a number of fans in 1999. A group was created with a number of knowledgable Ghostbusters Fans at the time. They included Norm Gagnon, Mike Neal, Wes Martin, AJ Quick, CPU64, & El among a few others.

The props representing proton packs were created by the prop department at Columbia Pictures. According to the book Making Ghostbusters by Don Shay, "the proton packs and nutrona wands were constructed in balsa wood and cardboard prototype form by Steven Dane-- with significant input from Ivan Reitman and Dan Aykroyd-- and then turned over to Chuck Gaspar for actual construction." (Pg. 69) They are made of molded fiberglass shells on aluminum backplates (or "motherboards") bolted to military surplus A.L.I.C.E. pack frames. The basic shape was sculpted from foam; later, a rubber mold was made, from which fiberglass shells were pulled. The "wand" had an extending barrel mechanism and the electronics were quite advanced for the time. They were then finished with various surplus 1960s resistors, pneumatic fittings, hoses and ribbon cable, as well as surplus warning labels and custom-made metal fittings. Harold Ramis estimated the weight of the "actual operational packs" at approximately 50lbs in a 1989 Cinefex article (issue 40, page 7), though he added that if the batteries were left out they were nearly twenty pounds lighter. The "hero" props were substituted in stunt scenes by flimsy foam rubber pulls from the same mold. The proton packs have a lightbar with 15 blue scrolling lights in a box on the left-hand side and 4 red lights in the circular "cyclotron" portion of the bottom of the prop that light up in rotation. The "wand" also featured numerous light features; the most elaborate versions had fluorescent bargraphs, incandescent bulbs, and strobing flashes in the tip for the visual effects crew to synchronize the famous 'streams'.

Some of the packs from Ghostbusters were used in the film's follow-up, Ghostbusters 2; these packs were slightly redressed with a black crank knob and thinner ribbon cable. On one pack the angle of the gun mount pitches foward slightly due to mis-drilled holes in the fiberglass shell. During the production the shoulder straps had padding added, which can be seen on and off during the film. In addition to these redressed props, one of the originals was hastily cast as a buck to produce basic, lightweight "mid-grade" props (as a solution to complaints by the actors about the weight of the original prop). These mid-grade pieces featured many details cast in as part of the mold, instead of separate fittings. The electronics and mechanisms were also cut down greatly, reducing the total weight to "about twenty-eight pounds" according to Ramis in Cinefex. The original GB1 props would appear in close-ups, the mid-grade in all other scenes, and new rubber "stunt" packs were made for whenever the actor needed to take a fall. Several GB2 packs have surfaced for auction—at least one rubber stunt, and one fiberglass mid-grade prop. The auctioned mid-grade prop was lost shortly after sale in an airport baggage mishap. The piece was documented before its loss, revealing much of the shoddy casting techniques used in its creation. All three variations of the GB2 pack have been displayed at various Planet Hollywood restaurants around the U.S.

The Video Game Packs (of the PC, the PS3 and the Xbox 360 version) are essentially the same packs from Ghostbusters II, with a few changes and a lot of wear and tear. The main change to the base pack is that the Crank knob is now a vent and flashing red light. The vent is used to release steam from the pack so it doesn't overheat. When the pack vents, the steam is shot out, and the Bumper and Cyclotron both push out to cool off. In the event of a meltdown, the pack will automatically vent and shove out the 4 Cores of the Cyclotron along with the Bumper and Cyclotron itself. The gun has more upgrades as the game goes on.

The Video Game pack also adds new cosmetic lights, some of which have a purpose in-game. For example: The HGA has a pie chart light display that indicates the health of the ghost currently in the players sights, while the light bars below it show the players health and current temperature of the proton pack. 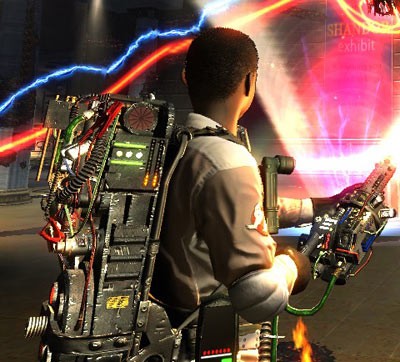 One set of lights however, was chosen for the pack due to a common misconception with the GB1 pack. In the hotel chase scene with Slimer, Ray's (Dan Aykroyd) pack seems to have two lights beside the powercell:

However, this is just paint worn off of the pack shell, allowing light from the power cell to shine through.This was taken, despite this, and put on the Video Game Pack: 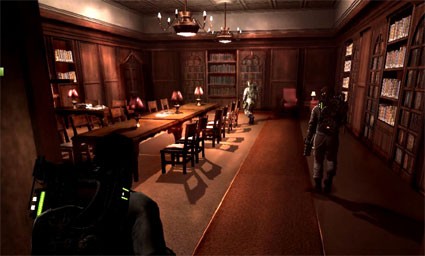 Over the course of the game, the pack will receive several upgrades. The upgrades are: Boson Darts, Stasis Stream, Shock Blaster, Slime Blower Mk. II, Slime Tether, the Meson Collider, and the Overload Pulse. All of these tools have different effectiveness on different ghosts and entities. Interestingly enough, the upgrades you purchase throughout the game do not apply to the other Ghostbusters. Also, some add-ons (such as the Slime Tether) are used to solve many of the games puzzles and to even capture ghosts in new ways. 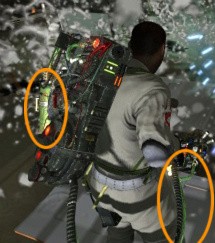 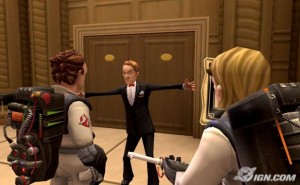 The only differences are that the Slime Blower shoots out Slime Bombs, which spread a large amount of slime over an area.

Many members of the Gbfans.com community have made their own Video Game pack, mostly from eyeballing the game and hand making most of the pieces. Unfortunately, no real plans have been made yet due to the extensive additions and versions of the packs. We hope to see some plans come out soon so we that we might make these amazing looking packs a reality. 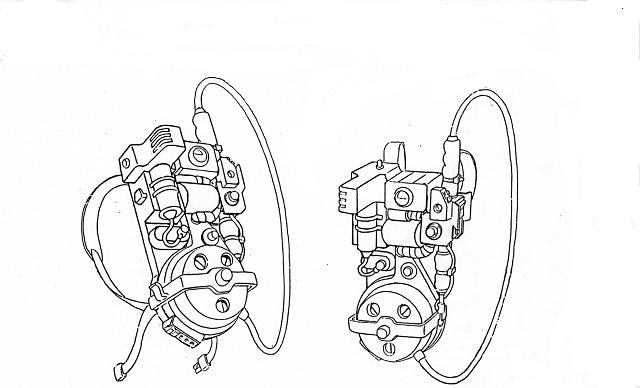 The Real Ghostbusters are the same from start to end, and are even believed to be canon in the fictional world. The packs are essentially the same as the original packs, barring a few changes. The packs are blue with different color accents along with a 3-ringed Cyclotron and more rounded and simpler design. The pack had a hook by the Ion Arm as to carry the ghost traps, instead of hanging the trap on the belt like in the movie. The gun on the pack is more basic as well, but works the same as the gun in the original movie. Also, the pack now has a Self Destruct feature and one can reverse the polarity of the pack. Different Forms

A few brave Gbfans.com members have attempted and successfully created a Real Ghostbusters Pack. The problem is that no extensive plans have been made for them, and the actual size, shape, and parts of the pack can sometimes vary between episodes, and not all parts of the pack are shown. However, it's a very basic design and can be done with enough patience and hard work.

If you want to take the easy route you can always buy the Kenner Real Ghostbusters Pack, although not to scale it is a suitable alternative until other options are discovered.

The Extreme Ghostbusters pack was used only in the TV show Extreme Ghostbusters (1997) and has not been seen anywhere else. The pack now runs off of small power cell canisters that are inserted into the gun, then fired like a normal proton gun. There are many differences besides the main fuel system compared to the other packs. The EGB pack no longer shares any part with the Movie, Game, or RGB packs. This may be why the pack is not very popular, or all that well known to prop builders.

Only one member (irricanian) has created any resource and build info for this lesser appreciated pack. The build involves mainly everyday parts and rough estimates thanks to variations of the pack from sloppy drawing and animations from the show. One could build this pack for under $100, and in about one day. The design, popularity, and the recognizable aspects of this pack leave it to be a very small, unknown cornerstone in the world of proton pack and Ghostbuster prop building.

Member Harry Bardwell has taken the Extreme Ghostbusters proton pack one step further by attempting to peel away the outer coverings. He has produced detailed drawings of the components inside and labeled them to create a sense of continuity from the original packs to these.

The Pack in The Real Ghostbusters is seen in different forms throughout the series. The pack worn by the Ghost "Ghostbusters" in Citizen Ghost is a Proton Pack that feeds of Ectoplasmic energy and has a reversed polarity from the regular packs. The packs were also once modified to run off a large generator for increased power. The packs also appeared in the Extreme Ghostbusters, in the episode "Back in The Saddle". The packs were now all silver and metal like, but still were used like the original packs. The stream was changed and was now like the modified streams seen on the Extreme Ghostbusters Proton Pack.

This category has the following 2 subcategories, out of 2 total.

The following 36 pages are in this category, out of 36 total.