There are two models of fixed chassis, wire wound resistors made by Sage used on the Proton Pack. Both are found on the Ion Arm, but one model is exclusive to the GB1 Pack.

The Sage Silicohm M25W is the shorter resistor on the Ion Arm of both the GB1 and GB2 Proton Packs. The resistor is mounted on the left side of the Ion Arm and has the 5/32" diameter yellow hose attached that goes from the resistor bottom lead to the Legris elbow.

These are readily available from many online sources. 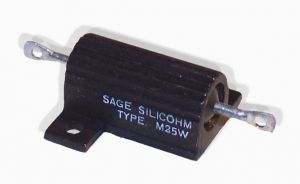 The Sage Silicohm M50W is the longer resistor on the Ion Arm, only visible on certain publicity shots of the GB1 Proton Packs (like the Omni cover pack). It was once believed that the Sage was used in GB1 and the Dale in GB2, but evidence seems to confirm that the Dale was used in both movies.

These are also readily available from many online sources. 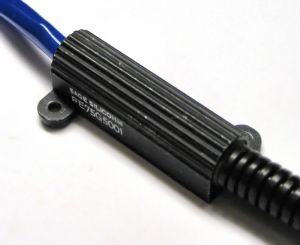