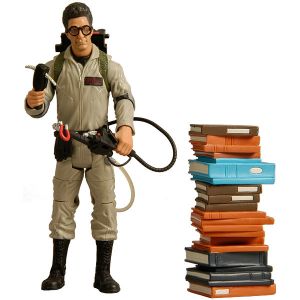 In 1986, Kenner released a line of toys not for the hit Ghostbusters movie, but for the upcoming cartoon series The Real Ghostbusters. The toy line, which lasted all the way through the series' demise, produced an expansive assortment of action figures, playsets, plushes, vehicles, and full sized role-playing gear.

Towards the end of The Real Ghostbusters toy line there were figures that were not released in 1992. These toys consisted of Egon's lab, Backpack Heroes, a ghost catching firetruck and the Ecto glow copter.

Much like its original Star Wars toys, Kenner's Real Ghostbusters line has weathered the test of time. Simple in design yet exquisitely unique, few toy lines before or since have had such diversity and such a significant impact on a base franchise.

In 1997, Trendmasters released a collection of toys and action figures for the Extreme Ghostbusters television show. Although the line failed to reach the scale, scope, and popularity of the original Real Ghostbusters line, there were still a variety of different toys produced.

In 2004, Neca released a short-run of Ghostbusters figures - however they ran into issues with character likenesses. The only characters to be released were Slimer, Stay Puft, Gozer, Zuul & Vinz Clortho (in Terror Dog form).

In 2009, Art Asylum in association with Diamond Select Toys created a line of Ghostbusters MiniMates. These highly detailed 2 inch figures included figures and ghosts from Ghostbusters, Ghostbusters II and The Real Ghostbusters. These toys were the first released that used the likenesses from the movies instead of the cartoons.