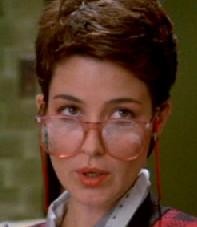 Janine is the Ghostbusters’ receptionist and is played by Annie Potts as a stereotypical curt New Yorker, with a heavy "Brooklyn" accent. She’s normally fairly gracious, but can turn caustic if pushed or stressed. She's depicted as having romantic designs on Egon Spengler in the first movie, though in the second her attentions turn to Louis Tully.

Janine is the Ghostbusters' receptionist and secretary; she answers the phone, deals with customers (sometimes how well depends on her mood), and handles a lot of the nitty-gritty paperwork side of the company. She's a bit abrasive and sarcastic, but bright and capable.

Born and raised in the Canarsie neighborhood of Brooklyn, she still has family living there--including her parents, her grandmother, her sister Doris, and her nephew Victor (who likes to chase his grandparents' cat and shoot Egon with a squirt gun). She lives in a apartment with a self-maintained tabletop garden, and a pet bird.

Having been teased as a child for her eccentric appearance, Janine spent many years being very self-conscious about her looks; this only got worse when she was hired by Ghostbusters, and fell in love with Egon Spengler. Her own attempts to flirt with him were rather clumsy and overdone, and between that and his own inability to articulate his feelings the relationship was full of confusion and reversal. It led to some rather rash and potentially disasterous decisions on her part.

One was dating businessman Paul Smart, who was only using her for the opportunity to steal the secrets of Ghostbuster technology. He succeeded, and created Robo Buster, which nearly put the company out of business. Later, angry about Egon not paying attention to her, she dated the Ghostbusters' newly hired lawyer and accountant Louis Tully for a time (Reflecting the relationship seen in Ghostbusters II, though the cartoons and comics eventually decided it was just a passing fling. Now's RGB#16 has Egon and Janine directly arguing about it, and she dismissed Louis as "sweet but harmless").

But the most disastrous decision of all was accepting the offer of a "Fairy Godmother" to "improve" her looks. First her voice, then her appearance subtly changed over time. More insidious was the change to her personality--her fiery personality softened and weakened. Fortunately, the Ghostbusters discovered what was going on, and stopped the "Fairy Godmother"--in reality, a malevolent entity known as a "Makeoverus lotsabucks" was slowly turning her into another creature just like it. Egon broke it's spell by finally admitting that he loved her, and Janine freed from the entity. They started dating more seriously after that, going to science films.

Janine's appearance was slowly changed over the course of the show. her "classic" appearance was seen in the 1986 ABC episodes, and in the sixty five 1987 episodes in first run syndication. In-story, the changes were later explained by the influence of the "Fairy Godmother" in the episode "Janine, You've Changed" (in the Real World, the explanation was network interference afraid Janine was too "unlikable" and her pointy glasses where 'scary")

Janine As A Ghostbuster

When the Ghostbusters go out of business, Janine is "downsized" out of her job and, apparently, doesn't keep in contact with Egon--when she sashays into his classroom in "Darkness At Noon" he is quite surprised. She stays to become a mentor and recurring supporting character to the new team of Ghostbusters

"Yeah, It's a sign alright, we're goin' out of business!"

"I've quit better jobs than this!"