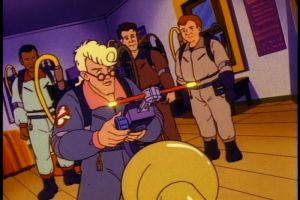 There were also two ongoing Real Ghostbusters comics, one published monthly by Now Comics in the US and the other published weekly (it eventually became monthly) by Marvel Comics in the United Kingdom, as well as a popular toy line manufactured by Kenner.

The entire series is available on DVD release in the United States by Time Life under the watchful eye of DVD content producer Andy Mangels as of late 2008. 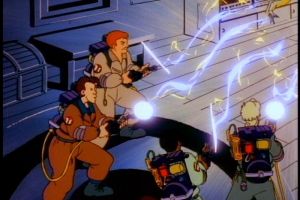 The series origin is told in the episode "Citizen Ghost" which is a flashback episode. Peter reveals that the suits were replaced with new ones that were in new colors. Gozer was taken out but the old suits had ecto-plasmic residue and Peter was supposed to destroy them. Also in that episode, it is revealed that Slimer stuck around the firehouse (suggested by Janine that he is lonely and the Ghostbusters were the first to pay any attention to him) and while Peter didn't like him, the others grew to like him after a few days, as he was harmless and valuable to research. Ray names him - to spite Peter - Slimer. At the end of the episode the Ghostbusters were in serious trouble with ghost versions of themselves that wanted to put them out of business. Slimer wore them out as they fired at him, wasting their ecto energy and allowing the Ghostbusters to capture them. Slimer then earned his spot as a pet and friend of the Ghostbusters.

"Take Two" explained, in a way, the differences between the cartoon and the film. The film, according to the episode, was made based on events in the cartoon. Inside jokes about the film are all over the episode.

A short pilot episode was produced, but never aired in full. Scenes of the pilot can be seen in TV promos that aired prior to the beginning of the series. As with most pilots, the short episode has several striking differences from the finished product. For the most part, the differences come down to a greater faithfulness to the movie: Peter Venkman's design bears a greater resemblance to Bill Murray, the Ghostbusters still use their original uniforms, and Slimer appears as a gluttonous bad guy as he does in the movie. Certain scenes from the pilot would be edited and used in the show's intro, most notably the encounter at the end with the Stay Puft Marshmallow Man. Other scenes from the pilot, including a shot of Ray waking up from bed with a Mr. Staypuft doll, the team sliding down the fire pole in silhouette, and a skeletonized Red Baron laughing as he flies across the sky, would be used in the special intro used for the Real Ghostbusters Halloween special, "The Halloween Door".

Maurice LaMarche, the voice of Egon Spengler, described that even though the auditioners did not want him to impersonate Harold Ramis, he did so and got the part. LaMarche mentioned that, supposedly, Bill Murray asked why Lorenzo Music's voice sounded like Garfield and not like himself, and this may have weighed in the replacing of Music, with Dave Coulier replacing him after 78 episodes. This is ironic considering that Bill Murray took over the role of Garfield for the live-action movies. Ernie Hudson was the only actor from the film who auditioned to reprise his role, Winston Zeddemore, for the animated series, but he lost to Arsenio Hall.

The Other Ghost Busters

"The Real" was added to the title over a dispute with Filmations Ghostbusters properties. After the success of the film, a TV series based on the Ghostbusters began production. At the same time The Real Ghostbusters was being created, Filmation was making a cartoon known as Filmations Ghostbusters, which was an animated continuation of Filmation's 1970s show/concept, Filmations The Ghost Busters, in which the business is carried on by their respective sons, Jake and Eddie, with Tracy still on board as their tech guru. Despite rumors to the contrary, Columbia was allowed to use the name Ghostbusters for its cartoon, but added "The Real" to snub Filmation. In the episode "The Spirit of Aunt Lois", Dr. Bassingham, a charlatan spiritualist wore an outfit similar to that of Jake Kong. With character designs by Jim McDermott, the animated characters were dramatically redesigned from the way the same characters looked in the movie due to likeness-rights issues.